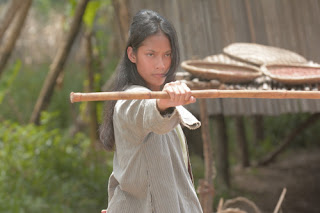 This story is about a girl, Dara, who is given a golden cane with the responsibility of learning a very special move. After she is given it, her master, Cempaka, is killed and the cane is stolen by her other two fellow students. She then fights to get it back with the help of a friend Elang and her other fellow student Angin. This film blended nature with martial arts. The use of the cane in fighting on the fields of grass really gave this film a different look than a city-like Jackie Chan film. I absolutely loved the story of two students who turn on their master and become really evil people. The way that Dara has a clear resistance to what is wrong is very appealing in this great Asian flick. Angin, who is the youngest student, pulls off a very serious and protective-like character which is convincing. There were not really any graphic scenes of blood but what was needed to be true to the illusion was implemented. Of course, there were massive leaps that the warriors take which are humanly impossible which makes the experience all the more fun. Elang was a vital character in the story as he is the backup battery to the force of good of Dara. Cempaka, who is only in there for the beginning, is a calm but strengthened master who pulls off some moves that make people question how she can do that being her age. She also states that killing a person equals a feeling of loss. That line shows the character’s level of maturity. I just love stories involving action that have a good protagonist who fights against the wrong whatever that may be. The line that says the life of a warrior is like a very long tunnel was a very deep analogy to me. It is mentioned in the first lines of the film. The person speaking mentions enemies lurking in the darkness of the tunnel but that there is always light at the end. I think that many audiences should see this as it is not dumbed down but it has a great message. You fight for what was rightfully given to you against the evil fallings of other individuals. It also let people know that being with others who are willing to help in a tough situation is being a team that it is stronger than one person. This was a high-flying piece that was as entertaining as it was teaching.
(Review by Wyatt Head)