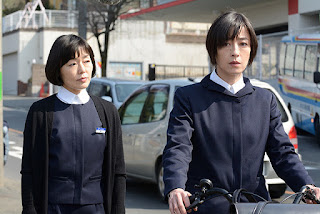 This crime drama is set in Japan and tells the overboard story of Rika. Rika is a part-timer at a bank who just made employee status and at home she just leads a boring life. Rika then decides to go off the deep end and steals people’s money through her transactions leading to a life of fake luxury. She also has an affair with a significantly younger man who is just leeching off of her. This film sort of reminds me of The Wolf of Wall Street but in a more orderly way. Unlike Jordan Belfort, Rika is a very under the radar type of person. The fact that she gets into so much theft is not comprehensible from her demeanor in the beginning of the film. She has such an innocent attitude in the beginning that it seems that a rich old man whom she services is trying to have sex with her. That scene was quite ridiculous. The film takes an informing turn when you first see the young man mentioned earlier stalking her on the train. You know that the choices Rika will make will lead to a disaster for her stability. Her trip down the rabbit hole of crime was thoroughly communicated with her forgery, her spending, and her impure sexual relations. The key point scene is when Rika takes money from a customer’s account for the first time to buy cosmetics. She figures she will just pay it back. I could hear the audience around me murmur “Don’t do it.” That action by the character is like having a password hint on the computer. Once you see it and you put thoughts together, you know the result. This whole film was about a person’s sense of greed and how it can overcome you like a server being in the weeds. Once you have gotten enough money in an unethical way, you realize that the work needed to cover it up will soon be impossible. If you want to be intertwined with interest of a character’s outcome watch Pale Moon. Maybe for some people it can take away the urge to make bad choices just for a temporary pleasure. It was tough to watch but I didn’t think at all that it was a waste of time. Being selfish is there in some of the people we encounter in the world. Rika is the right choice for a tool to show us that so much selfishness can actually become cruelty. As the 25 year veteran coworker of Rika says, “Money is just paper. It’s fake and it can’t make us free.”
(Review by Wyatt Head)