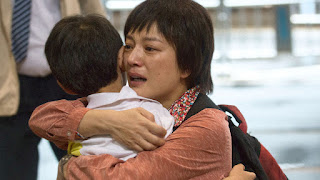 Dearest tells the story of two parents who lose their 3 year old child and the search for him through heart-breaking events. Losing a child is horrific and can ruin the parent’s lives. This concept in the film was accurately portrayed and showed the extent of the parents’ effort to resolve this feeling of anguish. When the film opens, the father, Tian Wen-Jun, is using the child to argue with his ex-wife, Lu Xiao-Juan. You feel sorry for the child because he has no idea what he is involved in. At the same time one feels frustration with the father for using his own offspring for disruptive causes. How the child disappears from the father is incredible. The scene involves no adult supervision and tragedy soon takes place. When I was watching this little child stray away from his friends at the playground I could feel alarming concern. The night shots where the father is calling everyone he can to find his child carried the chaos of Tian’s mind. As the clock reaches 3 hours past the last sight of the child, the audience feels the spiking anxiety of both of the parents. In my view the first hours of the child’s absence are the most important shots to shoot. There is even a wide search at the airport from a father who is reaching beyond desperate. The actor for Tian Wen-Jun captured the fear that would be in a parent’s eyes right on the dot. The degrading of mental sanity for both characters is captured as Lu Xiao-Juan hits Tian repetitively in the police station. You know that doesn’t help and it just takes the story to a heightened level of negativity. The most disturbing occurrence in the film is when the father is getting calls from conmen asking for ransom who actually don’t have the child. One is given a plate full of the reality of people with no morals. The cruelty of people is shown fully with guts out there. One man in poverty is trying to sell his boy to Tian because he can’t afford to take care of him. Me, being attached to the poor, took that 30 seconds very uneasily. In one conmen exchange Tian ends up warding off 5 or so men with a knife while begging for them to stop assaulting him. It is so disgusting that they are chasing him only for the money and were going to give him another boy as his son. The everyday unhappiness of not having your own flesh and blood was put beautifully in the dialogue. The filmmaker, Peter Ho-Sun Chan, really created a rush up the spine of the uncertainty and grief that happened to this real life family.
(Review by Wyatt Head)