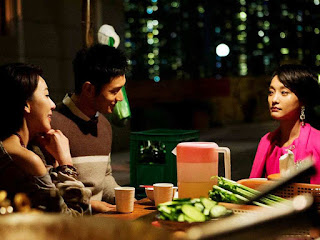 The theme of this film is similar to teen rom-coms in America where the normal young woman must transform in order to get the handsome young man to pay attention to her. Director Ho-Cheung Pang of Love in a Puff, that previously screened at AFFD, wrote the script with Luk Yee-sum based on a book by Luo Fu-man. It's a funny premise when it involves adult characters and the film securely rides on the charisma lead actress Xun Zhou as Angie, who despite her aversion to women who use their feminine wiles to attract the man, she is game enough to try anything.

Angie (Xun Zhou) has had a one way love with her best friend Marco (Xiaoming Haung) since her college days. She even gave up on her dream of being an artist to work with Marco after they graduated. One night Marco says he met someone on his last business trip and is excited to have his bestie meet her. Angie hides her panic and disappointment and later seeks advice from May (Yi-Lin Hsieh). May calls in reinforcement from what she calls her Barbie Army and they go to work trying to teach Angie how to use her female prowess. The clothes, the makeup, the baby talk manner in manipulating a guy to do anything for you are things that Angie truly despises. When Marco asks her to meet his new girlfriend Hailey (Sonia Sui), the restaurant was changed from a fancy location to a street food vendor. Marco is surprised to see Angie got dolled up and looking good. But he's oblivious to Hailey's over enthusiastic greeting to Angie as a hostile warning shot to the other woman. Angie armed with a blue tooth is reporting to her friends news from the front. The Barbie Army becomes even more determined when they realize they are up against a formidable opponent who knows all the tricks of flirting.

Angie is set up on some test dates while the women watch from other table. As much as she tries, flirtation does not come easy to her. But to her defence her date material are enough for her to end each one with a declarative “I HATE you”. Soon the army is teaching her how to say that with a softer edge that is part whine, part pout. Angie, as Marco's supervisor at work, doesn't give him time off to spend the weekend with Haily. So Marco sends her off on her biking trip so she can spend with her friends. Angie then asks Marco to go with her to an art exhibit because he had given her an IOU back in college when he made her miss the exhibit at that time. Marco is surprised and touched that she kept those things, but then he also kept all the stuff she gave him back then. He did at one time consider asking Angie for a date, but he considered her a dude. Certainly not the sweet, childish woman like Haily. The plan was almost successful until Hailey sees a tweet by Angie showing them having a good time together.

Guys in these types of movies never seem to fare well. Women who use those flirting techniques also seem to have lower opinions of men as they can easily manipulate them to do their bidding. It's a very light flippant comedy where both sexes just are as shallow and self involved as the other. Just as long as you don't get bonged down in gender politics or any serious philosophical issues, you can just kick back and laugh at the antics and the power of flirting or not to flirt.
(Review by reesa)