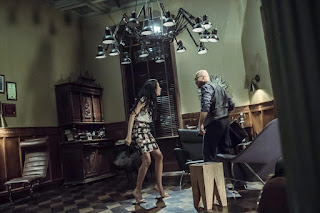 The Asian Film Festival Dallas always has interesting and complicated dramas on it's schedule of films each year. The Great Hypnotist is an entertaining, psychological thriller that is sometimes over done, but is definitely impressive. Directed by Leste Chen who also wrote the script with Endrix Ren challenges the viewer with it's supernatural elements and dimensional shifts. The Euro-gothic set decoration is intriguing as well with this huge chandelier that looks like a spider. The visions and cinematography presented seem often like a sleight of hand that is aimed at distracting one from some plot holes. But it's still fun to watch.

Xu Zheng plays Dr. Xu Ruining a psychiatrist who lectures a university class on the technicalities of hypnotism. Brisk and arrogant, he's a man who is confident in his skills. He is asked by his academic mentor Professor Fang (Lv Zhong) to help a patient who has stumped other psychiatrists with her claims of seeing dead people. Ren Xiaoyan (Karen Mok) show up at Xu's eerie clinic that has sounds bumping upstairs to add to it's unnerving atmosphere. Xu is a bit eccentric too with his quick and somewhat manic mannerisms. He challenges Ren's claim to see dead people. But she is also intelligent, wily and seems to often times turn the table on Xu. Ren doesn't care that she is seeing these visions, she just wants to know why.

Xu is known for putting patients under hypnotism more than once per session. Every time he uncovers something in Ren's story, he calls an associate to verify the information. Ren counters each discovery with her own challenge to Xu and at times it seems she is hypnotizing Xu. Of course there are times when the film seems like it's hypnotizing the audience making it drag in the middle. The shifts in balance between the two is well played especially by Hong Kong singer/actress/fashionista Mok who is sometimes sexy, coy, innocently vulnerable. While Xu plays his doctor like he needs a Xanax. The tight scenes often feel like a stage play that keeps the claustrophobic aura around the characters. The layers of the story keeps the audience guessing, but there's a good chance that you will probably figure it out fairly early on. The ending feels a little too tightly wrapped up with a bow. But the journey to it's conclusion is worth the time spent seeing ghosts.
(Review by reesa)