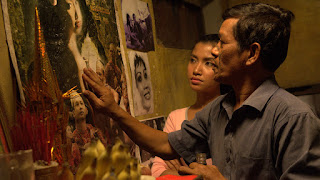 Some 300 films were made between 1965 and 1975 before the dark days of the Khmer Rouge destroyed with all but 30 films that survived. The filmmakers however did not. This debut film by Cambodian director Sotho Kulikar blends a bit of the country's history and the young people who must come to grips with the ghosts that surround their parents with a screenplay by Ian Masters.

The story shows Sophoun (Ma Rynet), a pretty young university student who has poor choice in men. Her boyfriend Veasna (Rous Mony) is a bad boy who pulls a gun at any confrontation including trying to win a prize for his girl at a carnival. “Phoun” is upset to hear her father Colonel Bora (Hun Sophy) is coming home which means he has found someone to marry her off. Her mother Sothea (Dy Saveth) is debilitated by a bad spells of depression. Her father's locks Phoun in her room when she returns after a night of partying with Veasna, so she takes off via the window and hides out at the old cinema that is being used to park scooters. She discovers the building's owner Vichea (Sok Sothun) is playing a film on the projector. Phoun is mesmerized by the story, but even more intrigued to discover the lead actress is her mother. Vichea tells her the last reel of the film is missing. Phoun assumes that Vichea was the director and tells him that they should finish remaking the missing part of the movie. Recruiting the film professor at her university, her enthusiasm even gets her boyfriend Veasna to play the role of the masked peasant. Veasna is hiding out anyways from a rival gang that was encouraged by her father to track him and Phoun.

The truth about her parents and the lost film takes a toll on Phoun. Once considered a beer girl by Veasna's friends who believe that he's lost his “balls” because of her, Phoun is determined that if she finishes the movie she can show it to her mother and bring her back from the what ever haunts her. Phoun's father has some secrets too and it's all tightly bound by the nightmare of the past. While Phoun finds herself a new destiny, she also unlocks some family secrets that need to be confronted. The aftermath of the Pol Pot regime still effects today's Phnom Penh and it's inhabitants. This movie is unique in shining a light on how those days are affecting the culture and relationships of the parents and their children. Hopefully we will be seeing more films from Cambodia through film festivals like the Asian Film Festival Dallas.
(Review by reesa)