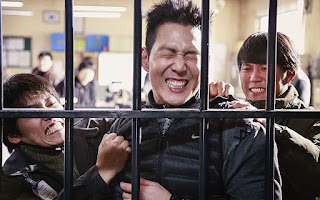 This is the type of foreign film that makes audiences in the US wonder where has the enthralling experience of action gone to. In this smashing (literally) comedy from Korea, Iko, an MMA fighter, is forced to get his brother back from the hands of crooks. He does this by completing extremely risky and painful stunts all across town to facilitate a gambling ring held by ‘Ace’. Before the blood starts marking people’s faces, Iko’s brother thinks that Iko is crying because his opponent was disqualified from a fight. What starts off the sneaky humor of the film is that Iko is making a “crying” sound actually from eating noodles. The funny man off the leash in the film is Iko’s sister-in-law. There’s a scene when Iko first doesn’t know what happened to his brother and the sister screams so quickly over the phone that she almost throws it on the street. Perhaps this family character was some comedic relief from the more graphic scenes of this gangster action comedy. In the same scene Iko talks to Ace through a small communication device in a holding cell and the detective says “What a psycho.” Some of these perfectly timed reactions from the detective and sister-in-law made most of the laughs. The stunt sequences were unbelievable. They’re firing rubber bullets that make holes in concrete at Iko and then he steps on two parallel walls to get over a barrier. The stunt man or men used in this production were incredibly fit for this project. One of the harder scenes for me was when the hostage brother is getting pummelled in the face by a mob and Iko has to sing karaoke during it. It caused some pretty deranged laughter in the theater considering the circumstances. Once again the sister-in-law shines in the lights when she breaks into the detective’s office and almost snaps his arm. The fight for family story is taken to an extreme to cause hard laughter and hard to watch shots. I think the section that I most applaud the quality of is the stunt in the football stadium. There are some fun and energizing aerial shots that can’t be missed of the fighting bull trying to meet his brother. The one final aspect I have to appreciate is the technology used like smart bracelets, offices in Mercedes-Benz, and blank tablets that project the screen. I’m pretty sure we do not have these in the US. If the Korean director CHOI Ho can make films of this caliber, I’m going to look him up on Netflix.
(Review by Wyatt Head)

Posted by Dallas Movie Screenings at 11:23 AM