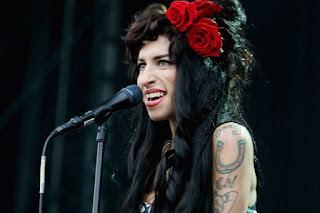 The documentary film, Amy, is an amazing portrait of a truly gifted young British vocal performer from North London. The jazz diva could sing soul, blues, jazz and reggae with a voice that
was not consistent with her young 16 years. Whether you followed her career or not, were a fan or not, the doc is worth a screening. Director Asif Kapadia makes incredible use of found footage,from her emerging teen years through to her untimely death from alcohol poisoning in July, 2011 at age 27. He splices it all together to unfold a truly tragic tale, told basically by Amy herself.

She shows us her humor, her gifts, her bleeding heart, her tortured soul, her addictions and her downfall, with the help of the media who ultimately brutalized and consumed her alive.
Interspersed with commentary by childhood friends, associates, industry professionals, parents and those who know her when, a tragic downward spiral of a very bright, creative,
talented, beautiful but very troubled spirit emerges. She battles depression and ultimately bulimia from an early age but uses her guitar and songwriting to work through issues and events in her life. We meet those who loved her and tried to save her from herself and her bad decisions, but had to do it from a distance due to her career, self imposed isolation and the knowledge that you just can't force a person to fly straight. She is painted as a person who fell victim to the poisons and pressures that fame brings with it, for when she burst onto the international
scene at 23, the tiny young fragile body and mind was just ill- equipped to deal with it. Touring drained her. Public demands exhausted her. A few of her interpersonal male relationships were,
while good for her craft, were not good for her. She was introduced to heroin, ecstasy, cocaine and ketamine, and her health began to suffer. Her relationships with men were fraught with drug and alcohol abuse, self harm, major dysfunction and domestic violence. She begins to show up to gigs late, unprepared, under the influence or not at all and
develops a poor reputation, internationally, as a professional. Tours are cancelled and she is hospitalized. The viewer sees little girl lost, being swallowed up by the demands of her profession; to write, to record, to produce money makers, to tour and to respond to the demands of her fans after breakout album "Back to Black" tops the charts in Britain and across the pond. She is loved and adored and is slowly dying. Her record eventually becomes the top selling album in Britain for the 21st century and what little is left of her begins to disappear for good. The doc attempts to paint a true portrait of the artist, with her giant bee hive hair,her filthy unrestrained mouth, her tortured soul, her brilliant creative abilities and ultimately we see the very heart of who she was. Most will be haunted by her trademark made-up, large expressive eyes, long after the film is over. Most will also want to reach out into the screen and save her, if only to hear more of what she would have produced over the next 50 years of her life. Her bio is heart-breakingly short.

After screening for Midnight Screenings at Cannes, and heading towards impending July release dates, "Amy" is emerging to be one of the best documentaries of 2015.
(Review by Cheryl Wurtz)