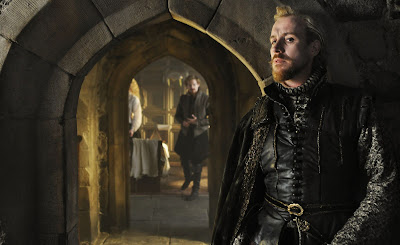 Director Roland Emmerich is best known for his action films like The Day After Tomorrow, 2012 and Independence Day. This time he tackles history mixing Shakespeare and English history. John Orloff's screenplay plays with the possibility that Shakespeare's 37 plays, 154 sonnets and poems were not written by him. The film puts forth the theory that the works were done by Edward de Vere, the 17th Earl of Oxford. The controversy started in the 19th century when people questioned humbled beginnings and obscure life with being a literary genius. Not only was the Duke suspected of being the writer, but also Francis Bacon, the 6th Earl of Derby, Christopher Marlowe and about 70 others.

During the later days of Queen Elizabeth I (Vanessa Redgrave) the Earl of Southampton (Xaview Samuel) brings his friend Edward the Earl of Oxford (Rhys Ifans) to watch the works of the city playwrights in the city. Impressed by the power of the plays on the common people, he entrusts his work to playwright Ben Johnson because it wouldn't seem fitting for a nobleman to be associated with the theater. Ben doesn't want to put his name on someone else's work and Will Shakespeare (Rafe Spall) an opportunistic illiterate actor hears about how much money he can earn puts the play out in his name. Will gets accolades which vexes Ben. There's also the political subtext of using the plays to influence the audience as Tudors and the Cecil's battle over the succession of the unmarried Queen.

In flashbacks the story of Edward as a literary prodigy writes a play at the age of 9 A Midsummer's Night's Dream portraying Puck for the young Queen. After the death of his parents the ward of the Queen is sent to live with William Cecil, 1rst Baron of Burghley (David Thewlis) and long time advisor to the Queen. William as a Puritan is opposed to the arts as being the work of the devil and forbids Edward to write his stories and plays. He's later blackmailed into marrying William's daughter who also scoffs at his writing as a dishonor to her family. William's son Robert (Edward Hogg) a hunchback is jealous of his father's attention to Edward who is tall, handsome and intelligent. Edward also has a child from his affair with the young Queen (Joely Richardson) but is not told about it. The Queen apparently had other bastard children over the years, a secret that William passes on to his son before he dies.

The superb cast of actors, the set decoration and the costumes give the film some resonance. The story goes back and forth from modern day, to Shakespeare's time, to flashbacks, and back again. It's sometimes hard to keep with the cast of characters from the complicated nobleman titles while mixing real history with the fictional premise. The long running time goes quickly though as small snippets of the plays are show probably like they were performed back in those days. The controversy that the film as already generated will hopefully not keep folks away. After all it is just a movie not a revisionist history lesson. You may want to watch Shakespeare in Love as a companion piece.
(Review by reesa)

Posted by Dallas Movie Screenings at 1:26 AM