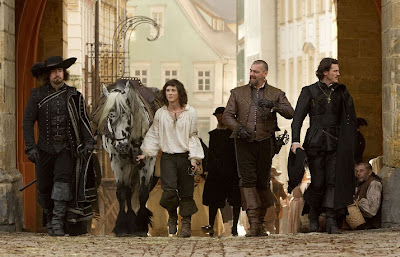 Alexandre Dumas serialized novel set in the 17th century was written in 1844. It's been immortalized in movies, musicals, TV series' and animated films. A favorite version is from 1973 by Richard Lester with Richard Chamberlain, Oliver Reed, Frank Finlay and Michael York. Charlton Heston was Cardinal Richelieu, Fay Dunaway was Milady de Winter and Rachel Welch was Constance. The Lester film too a fresh and funny approach to story. Paul WS Anderson's view of the story keeps the plot to retrieve the necklace, but adds some wild and over the top effects and fight scenes. It's like Sherlock Holmes, loud, outrageous and utterly forgettable although you will have a good time.

Percy Jackson's Logan Lerman has the plum role of the young D'Artagnan who leaves his small town in France to join the King's Musketeers following grandfather's footsteps. He runs into the three remaining ex-Musketeers who are still smarting from the betrayal of Milady de Winter (Milla Jovovich) who was Athos' (Matthew Macfadyen) lover a year ago. Basically without a cause the Musketeers are without a reason to exist. D'Artagnan challenges Athos to a duel at noon, then a confrontation with Porthos (Ray Stevenson) schedules a duel at one, and Aramis (Luke Evans) crosses paths with the young man who gets to duel him at two. Amused at the over confident young man, they are stopped from their fight by Cardinal Richelieu's (Christoph Waltz) guards. D'Artagnan begins to take on the 40 men with swords and soon the other's join in when they witness his fighting abilities. D'Artagnan catches the eye of the Queen's maid Constance (Gabriella Wilde) and is immediately smitten.

Richelieu is basically running the government for the young weak dandy King Louis XIII (Freddie Fox). He wants the king to punish the Musketeers for the humiliating loss, but the king is too impressed by their fighting skills. Richelieu with Milady de Winter plot to make it seem like Queen Anne (Juno Temple) was exchanging love letter with the English Duke of Buckingham (Orlando Bloom). It's up to Milady to plant the letters and steal the Queen's diamond anniversary necklace to plant on the Duke. Richelieu in the meantime tries to manipulate the king into holding a party and asking the Queen to wear the necklace after Louis finds the letters thinking his wife is cheating one him.

Loud, busy, chaotic with non stop action in 3D keeps this big budget retelling of the classic tale moving along with a plot that involves Leonardo DiVinci plans for flying war machines which are blimps with a sailing ship underneath. The steam punk machines not only have lots of weaponry but everyone fights with swords and black powder handguns. The costumes are beautifully realized and just wished there was time to enjoy them. There's a little bit of Pirates of the Caribbean with a skeleton figure head and the battle of the air ship. There's Orlando Bloom playing a bad guy with such relish you are waiting for him to twist his mustache and sneer. Waltz's power hungry Cardinal doesn't present such a evil force and more like a micro managing office tool. Mads Mikkelsen as Richelieu's Captain Rochefort manages to give his villain some threat. Anderson spends too much time on his wife Milla while she preens and fights. The three older Musketeers are well done, but don't seem to have much time on screen as the title would suggest. Lerman handles the action scenes well, but he looks too contemporary for a period film. Plus that haircut is really distracting.

Written by Alex Litvak and Andrew Davies the characters lack any form of conversation what doesn't involve some sort of posturing. The dialogue is only there to set up the next action scene. It's like been created for people who don't want to worry about plot, motivation or emotional connection with the characters. So for a movie afternoon of mindless diversion this is ok, but would recommend renting Lester's 1973 classic if you want to see something really special.
(Review by reesa)

Posted by Dallas Movie Screenings at 12:52 AM

Email ThisBlogThis!Share to TwitterShare to FacebookShare to Pinterest
Labels: The Three Musketeers review