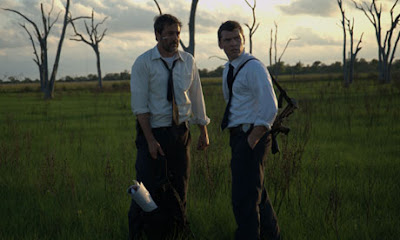 Southeast of Houston, near League City, TX, the bodies of four young women were found in an abandoned oil field between 1983 and 1991. Since the 1970's almost a couple dozen women have gone missing or murdered. The muddy dumping ground has earned the title the Killing Fields where as one of the characters in Ami Canaan Mann's film describes it as “this place is nothing but chaos, even God don't come here”.

Based on the notorious killing fields cases, the story follows transplanted Detective Brian Heigh (Jeffrey Dean Morgan) and his tightly wound partner Detective Mike Sounder (Sam Worthington) as they investigate a murder of a young woman in Texas City. Mike's ex-wife is Detective Pam Stall (Worthington's spy “wife” in The Debt Jessica Chastain) also investigating a case similar to theirs a missing young woman and asks for Brian's help. As Brian and Mike check for the identity of their murder victim it which takes them to the local pimp and his stable of women. They mention a white guy with lots of tattoo's who is at that moment checking out Little Anne (Chloe Gace Moretz) a local kid of Lucy a druggie prostitute whose kicks the kid out when she's entertaining. Mike clashes with one of Lucy's clients, a new guy in town who works at the oil fields and Lucy's son who are partying at Lucy's poor white trash house when they bring Anne home. Brian a deeply religious man who prays over the victims brings Anne to his house to have dinner with his wife (Annabeth Gish) and his family. Mike lives alone with his dog. Pam is tough as nails being a woman detective in Texas. Somehow all these loose ends intersect in this dark gloomy rain soaked ripped from the headline procedural.

Written by Donald F. Ferrarone the story is doom and depression. Mann (who is the daughter of Michael Mann) artfully focuses the camera on pores of people's faces and the patterns found in the dry and unyielding landscape. It feels like the movie is in black and white the cinematic underbelly of the world which dominates these detectives on their journey to find the killer.. It's too bad the pacing and editing are so wildly all over the place. We are given what could be interesting characters with no back stories to make us care what happens. Witnesses, clues, red herrings are thrown out there without explanation or follow through. Scenes are confusingly cut from one thing to another making it difficult to follow. There's no complaint about the able actors, even Worthington' Australian accent manages to be manipulated into an aggressive southern drawl. The last act which includes a car chase is exciting but the ending is wrapped up too neatly. It's a safe bet that this will not help tourism in Texas.
(Review by reesa)