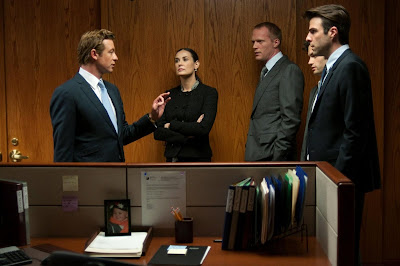 A small army of “downsizers” march into a Wall Street Investment bank quietly tapping on shoulders asking them to step into another room. From there they are offered a severance package then escorted by security from the building with their careers in box. One of those escorted had been with the 107 year old firm for 19 years. He accepts their verdict grudgingly but tries to tell them he's been working on something that needs to be explained and followed through. He's quickly reminded that someone will take care of it. Plus because of his position and his access to highly sensitive information his cell phones will be turned off immediately. Before he leaves he hands a jump drive to his co-worker with an ominous warning to be careful. The big sales boss is more concerned with his dying pet dog then the slaughter happening outside of his office. Gathering the remaining employees with a pep talk he applauds those who survived the day. Three out of seven from the world wide company had fallen under the ax this day. Only 33 are left in his trading room.

Peter Sullivan (Zachary Quinto) works on the program written by his Eric (Stanley Tucci) the ousted risk manager finishing the calculations. What he finds is so disturbing that he call his co-workers back from their celebration of not being let go, Seth (Penn Badgley) the Jr. Analyst and Will (Paul Bettany) his new boss taking over for Eric. They quickly call in Sam (Kevin Spacey) the office boss who then calls his boss Jared Cohen (Simon Baker) and other department directors. It's 2:30 am they are assessing the damage outlined in the report prepared by Peter whose analysis is taken seriously by Jared when it's revealed he has a doctorate in rocket science. The CEO John Tuld (Jeremy Irons) arrives by helicopter with the board shortly afterwards. The traders have to bide time while waiting for the big wigs decide their fate including Eric the author of the program putting him on hold until the situation is fixed so word doesn't leak out. Eric's boss Sarah Roberston (Demi Moore looking like she did in Disclosure) tells the CEO she tried to tell them they were in trouble and she ends up as the sacrificial lamb with a promise that she will be given a generous parting package.

First time feature director JC Chandor wrote the feature after his own experiences during the financial meltdown of 2008. His father worked at Merrill Lynch for almost 40 years. Produced by Zachary Quinto, they were able to attract a very impressive cast for the short 17 day shoot. Most of the action takes place in the office within 24 hours. They see the writing on the wall and the tension of how one little mistake could cause serious damage to world stock market. The dialogue doesn't bog down with math and speculative trade speak, but the urgency and fear is neatly portrayed. The callousness of the bosses letting people go to the CEO cavalier attitude of just making sure the company survives without a thought for the companies and employees put out of business from this crisis is a reminder of the selfish rich billionaires who are controlling our world. Despite the big name cast and the decent performances there's no real outrage. This neighbor hood is peopled with guys in suits who only care about how much money people make each year.
(Review by reesa)