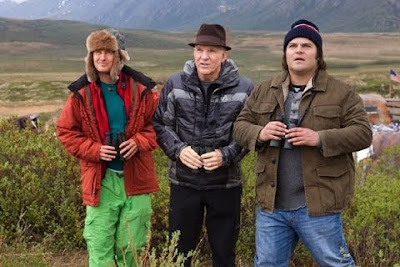 In competitive bird watching a “Big Year” is when individual contestants must identify as many species as possible and need to be prepared to invest a great deal of time and money. Directed by David Frankel (The Devil Wears Prada) and written by Howard Franklin, the film is based on Mark Obmascik's book The Big Year: A Tale of Man, Nature and Fowl Obsession. The film is a story of how three men obsessed with “birding” embark on a quest for their personal best while trying to out-do each other.

Jack Black plays Brad who narrates the story of how he decides to go for doing a Big Year. He works for a software company and lives at home with his parents. His dad Martin (Brian Dennehy) is not too happy with life choices in life reminding Brad his marriage broke up because of his hobby. His mother (Dianne Wiest) is more supportive even lending Brad a credit card for his bird pursuit. To Brad, birding in his life, his passion. He even has a gifted ability to identify any bird by it's song. Stu (Steve Martin) the CEO of a major company also decides that this may also be his Big Year. He underlings are amused by his quirks, his wife (JoBeth Williams) takes a more tolerant and understanding tone letting her husband do what he needs to be happy. After all he's rich, stable and they live a good life. The current Big Year champion Kenny Bostick (Owen Wilson) has already gone through two other wives before this third one who couldn't handle his obsession. Jessica (Rosamund Pike) was hoping that Kenny would stay home and commit to having a baby. So when he takes off for what he says his final stab at the record, she decides to rehab the house using a competitor contractor who happens to have a good looking son.

To accumulate sightings for one's bird tally, the birder needs to just see a particular species and keep a record of it. A picture while nice, is not necessary because the system is run on trust. Some even claim even if you hear the bird that would also count. There's even a phone number you can call where you can get information on what's been sighted so you can rush out there and see it yourself. Tracking the birds means hiking, climbing, traveling several thousand miles by car, foot, boat and plane. In between they return home trying to keep working at real life. Brad meets a fellow birder (Rashida Jones) who loves to make bird noises and he tries to mend his relationship with his dad who suffers a heart attack. Stu is reminded by his staff (Kevin Pollak and Joel McHale) that the company needs his face and input but he just wants to do this last adventure,

What had promised to be a hilarious film due to it's comic trio, it only turns out to be a slightly amusing look at guys getting excited about birds instead of sports, women, or superheroes. Yes, it's pleasant, has some beautiful scenery, and you learn more about birds than you wanted to know. But that's about it. If you find yourself actually looking at birds after this movie go check the Dallas Audubon at: http://audubondallas.org/ and good luck on your Big Year.
(Review by reesa)

Email ThisBlogThis!Share to TwitterShare to FacebookShare to Pinterest
Labels: The Big Year review