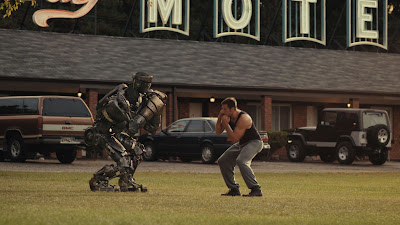 In this imaginary future, the boxing game has eliminated human punching bags and replaced them with huge robots. These are not the Transformer or Terminator cyborgs types. These are just machines programmed to perform in a wire roped rink with no hold barred. Hugh Jackman plays Charlie Kenton, a former boxer who has become a small time promoter. He owes money to everyone because he keeps betting unwisely. He gets the news about his former girlfriend passing away when he is called to appear in court for the custody hearing on the 11 year old son he has never seen.

Charlie an ex fighter is not a sympathetic sort of guy. He brash, self involved, over confident and irresponsible. He gambles on his robots, and runs before they can come to collect. His girlfriend Bailey (Evangeline Lilly) is the daughter of Charlie's boxing coach and owner of the gym where she repairs the machines. Charlie has to show up at court to sign over Max (Dakota Goyo) to his mother's sister Jerusha (Hope Davis) a wealthy socialite. Except Jerusha's husband wants to go to Europe for the summer and Charlie extorts money to keep the kid until after the summer. Charlie needs the cash to get a new robot so he agrees. The angry precocious kid is not to happy with his father but he's also a huge robot fight fan. Charlie's new robot gets totaled after he ignored Max's advise. To get parts to build another robot Charlie breaks into a metal junkyard in the rain and Max unexpectedly falls down a muddy cliff. He's saved by the arm of a buried robot which Charlie tells him to forget about it, but Max unearths it on his own and brings it back. (How he manages to extract a 1000 lb metal robot from the mud and get him on a gurney is never explained). The robot who's name is Atom is an early generation machine that has some unusual programming. He also proves to be a good fighter. Soon father and son begin bonding in the process while traveling the US to the boxing matches. This takes them to fight the ultimate robot called Zeus run by corporate owners and high tech computer wizards.

Based on a short story called “Steel” by Richard Matheson the screenplay was written by John Gatins. Date Night's Shawn Levy directed with producer Robert Zemeckis and executiver producer Steven Spielberg. With that kind of juice behind this movie, it offers some excellent animatronic fighting robots. And instead of the usual heavy hardware films with nothing by confusing flying metal, Real Steel aims to be full of heart. The story of the dad and kid is first, foremost and blatantly obvious. The battle scenes are sure to attract the kids who will enjoy the acceptable violence because it's between pieces of mechanized metal and not people. Charlie does get beat up for his gambling debts endangering Max plus he's not all that great to his kid. Often times it's Max as the more mature of the two. Dakota Goyo is a charming young man who dances really well but the robot dancing sequences are pure cheese. Jackman slightly smaller Wolverine fit with an American accent plays the annoying Charlie. He worked his boxing form with Sugar Ray Leonard who also consulted on the robot fighting moves using motion capture. Production designer Tom Meyers robot designs were turned into 26 live action animatronic props with hydraulic neck controls and radio controlled hands. Technically the film is great to watch, The climatic battle managed to get the screening audience excited and involved. It's too bad the overall story doesn't live up to the real stuff.
(Review by reesa)

Posted by Dallas Movie Screenings at 12:04 AM