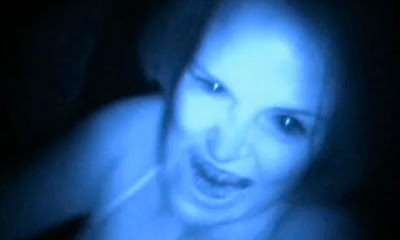 The new Paranormal Activity is sitting fairly high with most critics and audiences right now. Which leaves me with one big question. Why? What is it about this and the other 2 films that make this the horror film series that aligns the critical community and general audiences so much that the others have not seemed to do. This is a serious question because I do not understand. I have seen all 3 of these films now and read how frightening they were many times. However, I’m having a hard time matching the reaction to the film I’m watching.

We have 3 movies with plots that are exactly the same. In this one (just like the others) something strange appears to be going on in the house and the man of the house decides that he is going to film the house constantly to catch what’s going on. That’s it. Oh, and it’s 1988 (which makes me wonder why the camera was in high definition). I can give this one a bit more credit for having a little humor, but that’s about it.

Watching these films I am more self aware that this is a movie than almost any horror film I’ve ever seen. I give it credit for it’s low budget roots, but honestly this whole thing boils down to the kind of silly horror cliches and camera tricks that I would play around with when I was 10 years old. Scenes that literally involve a camera going back and forth like watching surveillance camera footage as a security guard. The trick behind the scenes is somebody suddenly appears by walking into the frame and then when we come back almost 30 seconds later they are inevitably closer to the victim. Another gag involved a light getting brighter and we had to wait for the camera to keep coming back to see how bright the light gets.

Most of this is really simple stuff that any child with a camera could do with their friends on a Friday evening. So, why do I want to pay $10 to go see something that I can easily do myself. The answer is “I don’t.”

There was a lady I talked to after the film that said I kept thinking that something was gonna happen with that fish tank. I told her that says a lot about the film that she spent half of a major motion picture staring at a fish tank waiting for bubbles to do something. As a matter of fact, that is the best wait to describe this film. You spend most of the running time staring into corners waiting for something to happen.
(Review by Nathan Ligon of Thank You for Watching)