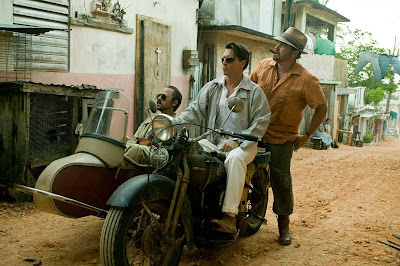 Hunter S. Thompson wrote the Rum Diary back in the early 1960's but put it away for about 40 years before it was published in 1998. The context of the story comes from Thompson's personal experience as a writer for a sports newspaper in San Juan, Puerto Rico set in the late 50's. Director/writer Bruce Robinson sets the tale in 1960 when Hunter's fictional character Paul Kemp from New York comes to Puerto Rico as the only applicant to the newspaper that has seen better days.

Johnny Depp plays his alter ego of Hunter S. Thompson as Paul Kemp. An alcoholic writer of novels that hasn't found his voice. The editor Edward j. Lotterman (Richard Jenkins) gives him a writing assignment doing horoscopes and reporting on the proliferation of bowling alleys on the island. He rooms with the newspaper photographer Bob Salas (Michael Rispoli) and the temporarily fired oddly eccentric Moberg (Giovanni Ribisi). His future at the failing newspaper is not going so well, so when an offer to write comes from real estate mogul Sanderson (Aaron Eckhart) but the content needed aims to dupe the public and Kemp questions if this is legal. Sanderson blackmails Kemp to do the job when he gets into a bit of a police problem with Salas. The job also gets him closer to Sanderson's beautiful girlfriend Chenault (Amber Heard) who Kemp met one night when she was skinny dipping in the ocean. Kemp keeps trying to break out the story about the corrupt hotel building but the editor just shut down the office.

The filmmaker had been sober for six and a half years when doing the screenplay but was suffering from writer's block. He started drinking a bottle of booze a day until the script was finished. He quit again while filming the movie, but one hot day he started drinking Corona's. He quit again after he was out of Depp's environment. The movie is basically one of excess with Kemp constantly hungover. The chaotic adventures that befall him include cock fighting, LSD dropped into the eyes, running from the locals while spitting fire from moonshine and messing with his bosses girlfriend. There are some really nice vintage vehicles and great costuming for the era. The dialogue and situations are funny and idiotic at times. Depp shows off his usual competence in his friend Hunter S. Thompson sort. The supporting cast play out their one note character quirks as the ambitious smarmy business guy, the jealous boyfriend of the sexy wild child, the drunk crazy writer, the typical brash loud American in a foreign land. It's all easy to read and enjoy but by the end of the movie the whole it doesn't amount to anything.
(Review by reesa)