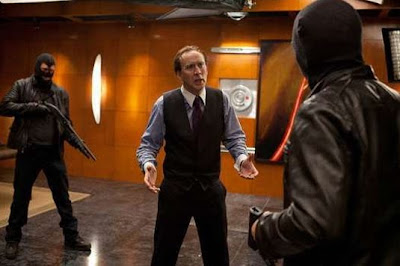 Director Joel Schumacher has added another action thriller to his already prestigious list of films that include Phantom of the Opera, The Client, and Phone Booth. Working again with Nicholas Cage, this ranks slightly better than their previous efforts together on The Number 23 or 8MM which frankly is not saying much. Written by Dead Like Me writer Karl Gajdusek, it pushes all the same buttons as other home invasion movies. Only this time there's besides Cage, Nicole Kidman and Liana Liberato as the harassed family.

Cage plays Kyle a seemly high powered fast talking salesman for the diamond trade with the impeccable suit and overly large glasses who is constantly on the phone. He's not home often so his wife Sarah (Nicole Kidman) is making dinner for the family which includes teen daughter Avery (Liana Liberato). Except Avery wants to go out and hang with her friends at a college party. Mom says no and busy dad says he agrees with whatever mom says. The sulky teen sneaks out of the house anyway jumping the fence in the woods. They have an enormous modern home in a private wealthy community with European style sparse furnishing, elite appliances, and an infinity pool. Sarah is supervising some renovations to part of the house. It's a lush life that needs a high tech security system. Sarah is bickering with Kyle over his lack of interest in her as he's constantly hustling clients when there's a knock on the door from the home security company that turn out to be extortionists who believe that Kyle has money and diamonds stashed somewhere in the house. The masked men huddle the terrified couple on the floor while yelling threatening bodily harm to get what they want. The female member of the invaders goes up stairs to smoke some crack and try one Sarah's clothes. Avery returns and she too is now held hostage. Kyle still refuses to give up the safe combination claiming there is no money or jewels. Not only that but one of the robbers tells Kyle that he came for his wife, that they are in love. Jonah (Cam Gigandet) is the good looking brother who set up the security system in the house and had engaged in lustful glances with Sarah. Ben Mendelsohn plays Elias the angry brother whose back is against the wall who will do anything to get the goods. There's also the muscle Ty (Dash Mihok) who is there to ensure the job is successful. Unfortunately their planned mission goes terribly awry when Kyle who suddenly starts to fight for his family.

Trespass is due to open in a very limited run at AMC Mesquite, before heading to VOD and DVD by next month. Maybe not quite good enough, the film does provide for some exciting moments and some interesting twists. The performances are about what one expect from everyone involved. At different points there are power struggles between the thieves as Jonah gets in the way of his brother using Sarah to manipulate Kyle. Kyle fighting back with his adrenaline fueled negotiation skills. Even Avery manages work over Ty's drugged up girlfriend Petal. There is some tense and graphic violence that is set to thrill. In a lot of ways it's just a by the numbers film with better production values.
(Review by reesa)