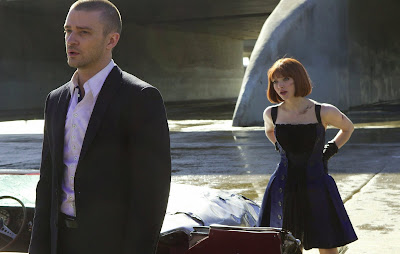 This interesting concept for a future world is reminiscent of the 1976 film Logan's Run where no one is allowed to be older than 30. Science fiction author Harlan Ellison thinks his short story “Repent Harlequin”, Said the Ticktockman is similar enough to warrant a lawsuit. Writer of the The Truman Show and the Gattaca also penned the screenplay and directed this feature about controlling the world population by controlling time by living fast, dying you and leaving a beautiful corpse.

Justin Timberlake plays Will Salas a hard working young man whose real age is 28. In this world everyone is embedded with a technology that keeps you at the physical age of 25. Your time is implanted in your forearm and you are automatically given 1 year which activates on your 25th birthday. Time is then used as payment and wages. You can accumulate time if you have a good job, and keep your bills down. His mother Rachael (Olivia Wilde) has just turned 50 but she doesn't look any older than her son. Will sees a guy at the local bar spending time frivolously. He's got 100 years on him, and people in this poor part of town are looking to take it like the gangsters called the Minutemen run by Fortis (Alex Pettyfer) who at 75 real years is constantly harassing the poor in the time zone. Will helps the guy as they take off running with the Minutemen in pursuit. His name is Henry Hamilton from New Greenwich the wealthy part of town. He explains to Will that people should not be immortal. That living so long is not natural especially since a long life is only allowed to a small percent of the population. While they are sleeping, Henry transfers his century of time to Will, then lets his clock run out on the bridge of the river. Unknowingly Will is accused of murdering Henry for his time. He hoped to surprise his mother, but he's too late her clock ran out. Angry he decides to make the powers that be pay by going to the seat of power in New Greenwich. But now he's got the Timekeepers on his tail. Timekeeper Leon (Cillian Murphy) has been policing time crimes for over 50 years. The police are given a small time payment each day so that thieves can't steal from them. He also has Fortis and his gang after him too.

During his first time in the big city with lots of time to spend, he ends up at the local casino where he wins a thousand years from Phillippe Weis (Vincent Kartheiser) who controls the time banks. He also meets his beautiful daughter Sylvia (Amanda Seyfried) a bored rich girl who is rebelling at her father's tight control of her life. When the Timekeepers catch up with Will at the Weis party Will ends up using Sylvia as a hostage. From this point all hell breaks loose as everyone is chasing time and Will wants to help the poor find time.

Yes, the movie is filled with “time” references. There's the element about the rich keeping the class distinctions by controlling the wealth a universal theme of us against them. The story is Robin Hood and Marian with a touch of Bonnie and Clyde stealing from the rich and giving to the poor. Justin does a credible job as the normal guy who just wants justice, but the chemistry between the two is pretty non existent. Their scenes together outside of the action scenes are flat and wooden. The range of emotions that should be expressed from being a hostage to being an accomplice should be more than just a pouty face. Cillian Murphy steals most of his scenes as the single minded Timekeeper who wants to maintain the balance of the world which looks like Los Angeles. What's disturbing in this is the bodies just laying around when your time runs out and no one bats and eye. The fact that Will is the only one trying to change the status quo doesn't bode well for this future scenario.
(Review by reesa)

Email ThisBlogThis!Share to TwitterShare to FacebookShare to Pinterest
Labels: In Time review