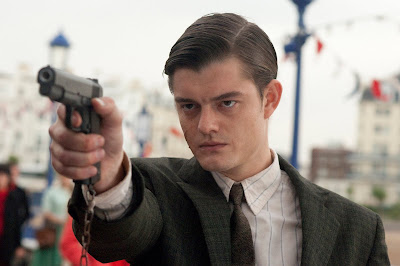 Pinkie is a young gangster whose gang operates along the pier area of Brighton Rock. He's also a sick vicious sociopath. Based on the 1938 Graham Greene novel, but it's set in the 1960 era of English mods and rockers where clean cut teen gangs are causing mob scenes on motor scooters in the coastal town. The pier itself which is really from nearby Eastbourne with it's Gothic Victorian buildings is the scenic background of this dark, depressing story of ambition, crime, anger and desperately lonely love.

Sam Riley plays Pinkie Brown who has no qualms about murdering a gambler who owes him money. The confrontation is witnessed by a young waitress Rose (Andrea Riseborough) who works for Ida (Helen Mirren). Rose is a a bit of a mousy young woman who yearns to be in love. So when Sam comes to find out how much she knows about his involvement with the murdered man, he flirts with her. He takes her Catholicism seriously as the dread of the death penalty feeds his fear of hell and damnation. However it doesn't stop from killing his boss on his way to the top of controlling the gang.
Pinkie's actions get the attention of the criminal kingpin Colleoni (Andy Serkis) who maneuvers to take down Pinkie. Meanwhile Sam marries Rose so she can't testify against him. Sam basically buys her from her ogre of a father who she's unhappily been taking care of for years. She is oblivious to his cruel and vicious nature, but embracing that evil in a “us against them” mentality. Even when she buys her self a pretty dress to celebrate her becoming a woman on her wedding night, Pinkie's reaction would not have been accepted by any modern woman who an a ounce of self respect. Their sick and twisted relationship is the main focus of the film, which neither character is very sympathetic.

Director/writer Rowan Joffe who is the son of director Roland Joffe and actress Jane Lapotaire adapted the story from the the orginal film and the novel which was set in the 1930's. He wanted to emphasize the Catholic theme in the book. The dark colors, cloud covered skies and night settings give the film an overall noir look. The costumes and sets are beautiful and mask the messing and sometimes incomprehensible accents and narrative. The tragic relationship that Rose is pursuing, the unrepentant Pinkie, and underuse of Helen Mirren and John Hurt really enough doesn't help this depressing movie. Visually stunning, it's too muddled a mess for even late night TV.
(Review by reesa)