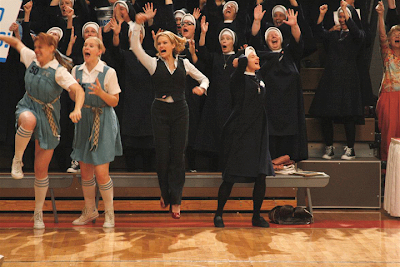 This the classic underdog story about an unknown women's basketball team fighting their way to win the first national championship is based on the true story of Pennsylvania's Immaculata's College. In 1971 women were still finding their place in the work place when marriage was considered the status quo. When Cathy Rush went for the position of basketball coach for an all women's Catholic college, she was the only one who applied. The school didn't even have a gym and they pay was $450 for the season.

Carla Gugino plays Cathy, a former basketball player who recently got married to Ed (David Borenaz) an NBA coach who is not too happy about her new position, but understands her passion for the game. Mother Superior (Ellen Burstyn) just thinks of the basketball team as a way of keeping the young women active and not thinking about boys. She lets Cathy have full reign over what happens in practice, but puts her foot down when Cathy uses boys to practice with the girls. Cathy has many obstacles to overcome from recruiting players, to practicing in an an unused rec hall, to getting funding for her team when the college is considering closing it's doors. It's Cathy's enthusiasm and dedication that keeps the young women rallied. Players drop like flies when they realized how much work is being demanded, and some of the moves are considered “unladylike”. She recruits Sister Sunday (Marley Shelton) who is having some moments of doubts about her calling and had been assigned chapel duty, which means cleaning the church. She doesn't agree with some of the Cathy's radical teaching methods, but is impressed how the young women begin to start thinking like a team. They have to use gyms from other schools to play their home games, but slowly they start to show improvement. To raise money to fly to the games they have to sell hand lotion the nuns seem to have boxes of in storage. The team goes for virtually unknown to winning the first national college championships. It's hard to tell a story when you know the ending. But the Mighty Mac manages to take you through the various stages of the teams development that can wring a tear from your eyes during the final games. There's going to be a lot of comparisons to Hoosiers and Sister Act, but the movie stands alone on it's performances in portraying the gumption to win.

Cathy Rush went on to winning more championships for Immaculata which managed not to close down. The school eventually turned co-ed and today is still thriving. Some of the women on the team became coaches after graduation. Interesting footnote is that one of the team players Katie Hayek who played Trish, was a former University of Miami shooting guard and theater major. She was diagnosed with Hodgkin's lymphoma as shooting began and had worked while undergoing chemotherapy. Her tenacious spirit is like this film of overcoming against all odds. It's also a reminder of how far we have come in women's equality in the past 40 years, something today's young women take for granted. Like women being taken seriously for playing sports outside of Olympic events is inspiring and that kind of story will never get old.
(Review by reesa)

Email ThisBlogThis!Share to TwitterShare to FacebookShare to Pinterest
Labels: The Mighty Macs review