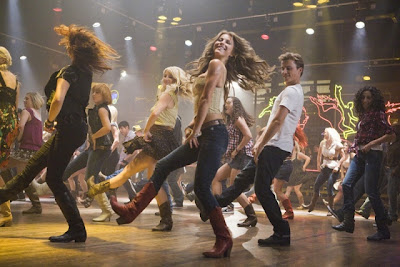 Kevin Bacon's iconic angry dance in the warehouse is probably burned into the brain cells of everyone that grew up in the 80's. Kenny Loggin's song from Footloose still gets everyone hopping and fist pumping. In Hustle and Flow's Craig Brewer”s version the infectious music is redone by various up and comers with Blake Shelton redoing the infamous title song. The screenplay by Brewer and Dean Pitchford integrates the small community of Bomont, GA with a more ethnically diverse population.

Three years have past since the accident which claimed the lives of five teenagers coming home after a dance party caused the town council to outlaw dancing and loud music. Former Justin Timberlake back up dancer Kenny Wormald doing the Kevin Bacon role of Ren MacCormack a transplant from Boston who comes to live with his aunt and uncle after his mom dies. Like any big city kid dealing with the boonies he's got an attitude, but he's determined to make the best of it. He fixes up his uncle's old VW Bug then drives around town with his Ipod playlist blasting. The local cop gives him a ticket for disturbing the peace which Ren considers another small town annoyance. He catches the eye of the daughter of the local preacher Rev. Shaw Moore (Dennis Quaid). But pretty Ariel (Julianne Moore) is a wild child with only a passing curiosity for him. She's got a stock car racing boyfriend Chuck (Patrick John Flueger) a typical redneck who treats her like a party girl. Chuck seems to be the only villain in the story as the high school population don't seem to have any warring cliques of racial or social classes. Even Ren's first confrontation with a student starts angry but it's quickly dispelled. Ren quickly makes friends with farm boy Willard (Miles Teller doing the Chris Penn part) who is on the football team. The team takes him to the local Starlite Diner where the kids gather and the local proprietor keeps a watchful eye out for the cops so the kids can play music and dance. Ren wants to challenge the ban on dancing so the seniors can have a prom. This pits him against the Rev. Shaw and the council.

The yellow VW bug, the skinny ties, the warehouse dance and some of the other dance sequences are still intact and unlike Bacon Wolmald doesn't use a dance double. Wolmald may be from Boston in real life, but his accent in the movie seems to come and go. As the defiant daughter, Julianne Hough keeps those red cowboy boots and shows that she's more than just a country singer and dancer with the stars. The two newbies light up the screen and it helps that they are surrounded by seasoned actors like Quaid, and Andie MacDowell. As in the first movie the character of Willard is the scene stealer and Miles Teller of Rabbit Hole proves he's also game.

The storyline of a town banning dancing and no one challenging it until Ren shows up seems a little far fetched. As much as they couched it with the preacher's righteous stance to protect their children the teens all manage to know all the latest dance moves. The dancing is more Step-Up but the quick-cuts don't let the viewer enjoy the talented cast do their moves. While a remake of a popular movie seems like another unnecessary production at least the result is fun and the music is still dance-able as it was in 1984.
(Review by reesa)