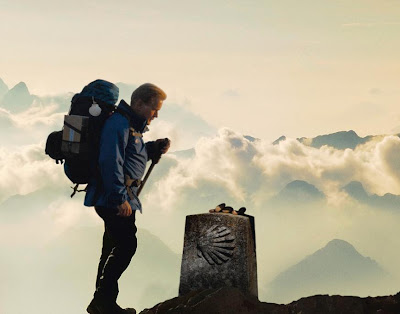 Tom Avery is an eye doctor in California who gets a call from Spain informing him that his only son had died in an accident while making a pilgrimage. Tom who had some issues with his grown child's restless nature and was reluctant when Daniel left to find himself. When he goes to Spain to bring the body back, Tom decides to take the cremated remains and finish the 450 mile walk of the El camino de Santiago leaving a little bit of ash along the way.

Written and directed by Emilio Estevez who started the project in 2003 after his son Taylor drove the length of the Camino with is grandfather Martin Sheen. Taylor met the woman who he would eventually marry. Sheen and Estevez took the film around the country offering Q&A's after the screenings. Estevez related on how he saw the parallels with the characters of from the Wizard of Oz in Tom and his traveling companions he meets along The Way. The story is a mediation of the life, loss, death and faith. It also serves as a travelogue featuring the beauty of Spain along the route of Saint James.

The Way of St. James or El Camino de Santiago is the route to the Cathedral of Santiago de compostela in Northwestern Spain city of Galicia where it is said the remains of Saint James are buried. Legend tells that St. James was taken to Iberian because his brother John spent some time preaching on the Peninsula. His body was supposedly lost at sea but washed ashore undamaged covered in scallops. The scallop shell is still used today as a metaphor for the Santiago pilgrims. The route has existed over a thousand years and one of the most important Christian pilgrimages during medieval times. Before that it was a Roman trade route called the Milky Way as travelers followed the Milky Way to the Atlantic Ocean. Today thousands of people people still travel by foot, bicycle, horseback, donkey and motor vehicles.

For Tom Avery (Martin Sheen) he seeks to understand why his son would want to go on such an adventure. Using his son's hiking gear he gets the Camino “passport” and sets off by himself. Since there are so many travelers most of the towns and villages along the route are friendly and helpful to the pilgrims who have scallops attached to their backpacks. He meets a Dutchman Joost (Yorick van Wageningen) who says he's walking to lose weight before he gets married. He is also selling weed to fellow travelers. Tom is not exactly ready for company, but Yoost is so easy going that he follows Tom without too much protest. Next he meets up chain smoking Sarah (Deborah Kara Unger) who claims she will end her cigarette habit on the completing the walk. She also calls Tom on shortcomings while hiding her own issues. Later they meet Jack (James Nesbitt) the blocked writer who they find ranting to himself in the big field. He becomes inspired by Tom's story and begins to find his voice again.

Estevez wrote the story with his dad in mind. They took the film crew by car along the route for the 40 day shoot while the actors walked approximately 350 kilometers during the filming. They also used the actual pilgrims and Roma Gypsies. The story may be fairly predictable with Tom the angry shell of a man who eventually finds clarity and peace, and Jack, Yoost and Sarah serving as the Scarecrow, the Lion and the Tin Man serving as his traveling companions doesn't really break new ground. The wordy exposition uttered like hard truths to be confronted then walked through can get tiresome. At least the spiritual message doesn't follow any particular path, just a universal belief of something greater than ourselves. Plus the gorgeous countryside makes one want to do this pilgrimage when one has a few months and the funds to accomplish it.
(Review by reesa)

Posted by Dallas Movie Screenings at 12:02 AM

Email ThisBlogThis!Share to TwitterShare to FacebookShare to Pinterest
Labels: The Way review