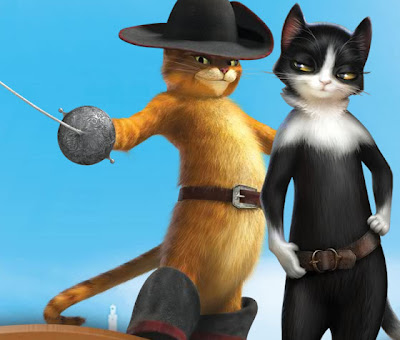 The director Chris Miller of Shrek the Third and probably the worst of the trilogy is back at the helm of Puss and Boots produced by Guillermo del Toro and written by Tom Wheeler. Antonio Banderas is back as the overly confident orange tabby that knows how and when to play the cute kitty card. In this prequel to the Shrek series, it tells the story of Puss and Boots background as a thief and how he saves the world.

Puss and Boots is a lady killer and is being run out of town by the owner of the happy feline. He walks into a bar and has to endure a slew of kitty jokes. They propose they turn him in for the reward, but he impresses them with his fighting skills. Times are tough and he needs a job. He's told of the notorious outlaws Jack and Jill (Billy Bob Thornton and Amy Sedaris) who have stolen some magic beans that is a gateway to a giants' castle in the sky with a goose that lays golden eggs. Jack and Jill are a nasty pair, although Jack is pressuring Jill to start a family. There is someone else trying to steal the beens too. Kitty Softpaws (Salma Hayek) who wears a full body leather costume and can best Puss and Boots in a fight. His childhood friend Humpty Dumpty (Zach Galifianakis) is back in town after their falling out years ago. Puss and Boots wanting to straighten out his thieving life was manipulated into committing a crime by Humpty and a Puss and Boots leaves his friend to get caught while he escapes. Now out of prison, he wants in on the job and getting a second chance at their friendship.

Does anyone think it's odd that the main characters of of a movie aimed at children are thieves? Although the main gist of the story is about friendship, betrayal and redemption, the characters do steal things that don't belong to them. There's also some adult types of innuendo's that will go over kids heads, and maybe bordering on inappropriate. Puss and Boots still displays the cute kitty bits and it's incorporation into the character actions are pretty funny. Declawed Softpaws by Salma Hayak lacked chrisma as a cartoon voice. Zach Galifianakis's Humpty Dumpty's good and bad egg is annoying like Rumpelstiltskin was in Shrek. Kids may love it, but parents prepare to take a snooze through parts of it.
(Review by reesa)

Email ThisBlogThis!Share to TwitterShare to FacebookShare to Pinterest
Labels: Puss and Boots review