Back to the Future II Future Past Party 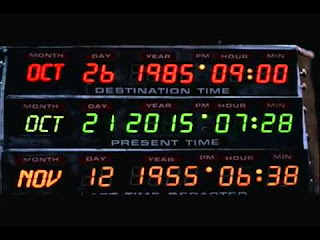 BACK TO THE FUTURE PART II FUTURE PAST PARTY

The Alamo Drafthouse is pleased to announce a collaboration with Aviation Cinemas and Texas Theatre for a special showing of BACK TO THE FUTURE PART II with a themed after party to celebrate the day that Doc Brown and Marty McFly travel to the future - October 21, 2015.

It will be a night where the past and the future collide at the historic 84-year-old theater. Festivities begin at 6:30 pm and will feature a replica DeLorean Time Machine, custom Wild Gunman arcade, a DJ spinning '50s, '80s and 2015 music, themed drink specials and more surprises!

Live music by Austin’s Calling Jack Burton playing all the hits from the film with a themed performance complete with decor, costumes and more
Attendees are encouraged to dress in either 1950s or 1980s attire


ALAMO & TEXAS TEAM UP
James Wallace, Alamo Drafthouse DFW Creative Manager/Programmer, said:
“The BACK TO THE FUTURE series is not only one of the most fan-loved franchises in cinema, but it sits at the top of my own list of favorite films of all time. So I felt personally responsible for planning an event that captured the spirit of the beloved films and celebrated this once in a lifetime anniversary.” Wallace added “And we are thrilled to team up with our friends at the Texas Theatre. As a movie nerd, I can’t imagine many things more heavy than two theaters like ours coming together on one night to co-host a night that fans will never forget.”

Barak Epstein, CEO of Aviation Cinemas and operator of The Texas Theatre said:
"We've been looking for screening event to work together on ever since Alamo Drafthouse came to town and I can't think of a better mashup than this once in a lifetime time space alignment of 10-21-15!"

Email ThisBlogThis!Share to TwitterShare to FacebookShare to Pinterest
Labels: Alamo Drafthouse, Back to the Future II Future Past Party, Texas Theater