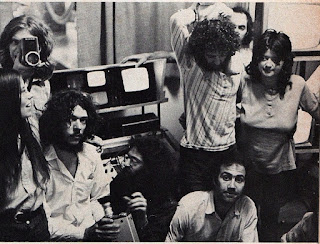 This energetic documentary follows a group of young people in the 70’s that film events surrounding them with their beloved camera. I never knew of these people and found it to be a fun story that I wouldn’t have seen if it were not for Videofest. What put me in the perspective of the film was the fact that there were only 3 networks at that time on TV. Knowing what today’s hundreds of channels are like, I was flabbergasted. I really felt the happiness of the people who were filming the world around them because of the camera. To them, it was so liberating to have a portable camera that you could take with you. Now we have everything on our phones and we take the magic for granted. Some of the footage was depictions of violent outbursts of the public and of the Black Panthers. This was some excellent footage to see because of its historical relevance. The main members of the group said that they could share their stories with an incredible camera that could play-back instantly. When we hear the young people of that day saying we’re going to make the world better, it sounded just like what college students are saying today. From the videos that the Videofreex took, you could see that mission of bringing attention to these monumental events that were outcries from the public. I remember that there was some video footage from the woods that looked really neat and art-like. The ironic thing is that the Videofreex were able to land a show with CBS because of an interest in their work. That just showed me that even back then the television established wanted to go with the times. The Videofreex felt like a rock band in the way that CBS had set them up. It was kind of like a rags to riches story for me in just that part of the documentary. They were filming what they wanted with not a lot of money and then they suddenly are in a big bus. These guys were radical but they were working for CBS. The film really showed the contrast between the goals of the group and CBS which led to a fall out. One man said in the film that no man who was healthy could ignore the war because they could’ve gotten drafted. That line really stood with me in the realization of the purpose of what these guys were doing. As they all say, “We’re all Videofreex.”
(Review by Wyatt Head)