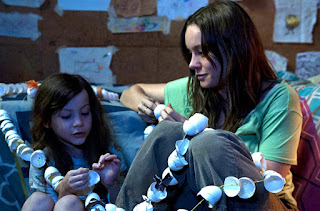 Plot:
After 5-year-old Jack and his mother escape from the enclosed surroundings that Jack has known his entire life, the boy makes a thrilling discovery: the outside world.


Opening:
What if you were stuck in a room for several years? I can tell you right now that I wouldn’t make it. I would lose a lot of weight and look weird as a tall, skinny person, make friends with my pillow, and lose my mind. How did Brie Larson do? And is she is a lock for a Best Actress nomination? Let’s get reel and break this down.

Pros
Director Lenny Abrahamson is one of the major highlights in this emotional journey with a mother and her son. Not only does he get two fantastic performances from the two leads, but really showed the impact the world has on a child that sees it for the very first time versus what it’s like for an adult to come back into the world they once were in. Without spoiling anything, because I think its best if you go in blind; Abrahamson adapts this story with so much emotional punch that this story will get to your heart strings. The writing is also very well done. I haven’t read the book, but I have heard good things so I can’t really compare it.

Pros
Brie. Freaking. Larson. This wonderfully talented and beautiful actress has been on my radar for quite a while and this is her crowning achievement so far in her career. She brings the full range of emotions and vulnerability that will tear your heart as her performance unravels. She has a natural and authentic relationship with her son and I believed it. Jacob Tremblay plays her son and he is wonderful. He gave a heart-felt performance of a kid who hasn’t seen the world and, when he does, his eyes are opened to an infinite imagination. He embodied that feeling you got as a child when you start exploring the world for the first time, so basically what I am saying is that it hits you in those relatable feels. Do not be surprised if he gets nominated for this role, he just as good as Larson.

Cons
Excluding Joan Allen and Sean Bridgers, I thought the supporting cast was fine and didn’t really add anymore levity to the story, unlike our leads.

Pros
The confinement of the room with the two leads does add that sense of closeness for their relationship making us as an audience become closer to them. Everything else is shot well, so no complaints there.

Pros
Being super interested in the story and how it would be played out, I was never bored with the length of the film. I will say that the time spent in the room was a bit faster paced than the second half. I can’t stress this enough, I encourage everyone to go in and having known as little as possible for a greater experience.

Cons
Some people may find the story boring and may tune out at the second half because the mystery is kind of gone, but it’s still an emotional roller coaster from start to finish.

Overall
This is a great mother and son relationship movie with powerful performances from Larson and Tremblay. I am not going to lie, I cried and I am not ashamed.