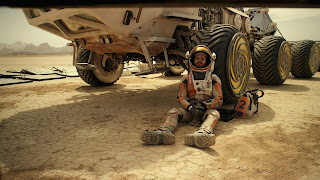 It's interesting that Nasa just announced the amazing news of finding water on the planet Mars just when Ridley Scott's new film The Martian is due to open. The film based on Andy Weir's 2011 novel of the same name was adapted by Drew Goddard was able to relay a story that's told mostly from the character's log of being stranded on the planet and the science that helps him survive. Outside of the dust storm at the beginning of the film that precipitates the reason why he gets stuck, it's the only bit that was poetic license by the author. The rest of the movie is technically impressive with a few liberties that unless you were actually a scientist you would not notice. The best part of the movie is telling the world out there that science matters.

The crew of the Hermes has been Mars establishing a habitat and gathering samples. When the storm hits, the mission commander Melissa Lewis (Jessica Chastain) decides to scrub the mission and leave before their return ship is damaged by the high winds. During the evacuation Mark Watney (Matt Damon) is hit by flying debris which hits his suit knocking out his telemetry leading the others to believe that he's dead. Lewis tries to reach him, but the ship will not be able to fly unless they leave right away. They report his passing to the command center and the world mourns the astronaut. Meanwhile after the storm, Watney wakes up with a piece of metal in him and realizes he's on his own. He doesn't panic and lets his training take over. From repairing his body, to taking inventory of his supplies. His math skills are needed to figure out how to survive the four years it would take for a rescue party to return. But of course they don't know he's still there.

Being the ship's botanist, Watney figures out how to grow potatoes. The book goes into great detail on how he has to give life to the inert Mars soil. Also the tediousness of trying to survive and keep the solar panels free of dust to keep the power running. There's the question of creating water that the plants need. While on earth, a tech Mindy Lewis (Mackenzie Davis) looking at the pictures from the planet, notices something odd about the way equipment at the hab site is moving. Her bosses NASA director Teddy Sanders (Jeff Daniels) and Mars mission chief Vincent Kapoor (Chiwetel Ejiofor) are faced with a huge dilemma. NASA PR spokesperson Annie Montrose (Kristian Wiig) has to dance around the agency's public image while they try to figure out how to get him home.

Damon is wonderful as the curious, talkative and amusing Watney. Astronauts are trained to survive under all circumstances. Everyone on the Hermes, Chastain, Michael Peña, Kate Mara, Sebastian Stan, and Aksel Hennie are a good representatives on how real astronauts are trained to exceed mission objectives. The media circus on earth, and the command center trying to communicate with Watney, or launching supplies keep the movie moving forward to the last action packed third act. If you haven't read the book, you should. The story follows closely just fills in the things that you just can't detail in the film form. One of the best movies to open up the fall season.
(Review by reesa)

The Martian at NAS Fort Worth JRB

Military personnel from NAS Fort Worth JRB were invited to a special screening of THE MARTIAN, starring Matt Damon, and served nearly 500 Mars-inspired potatoes at a lunch Monday, Sept. 28. The event was a goodwill initiative as a thank you for their continued service. Lunch was catered by Coburn's of Fort Worth. 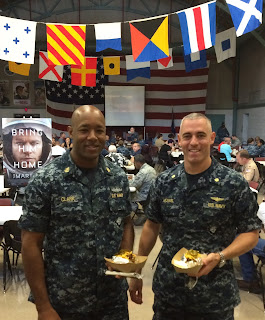 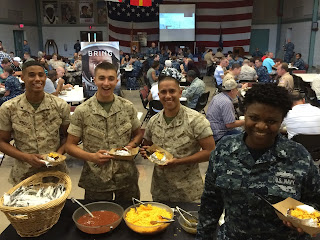 (left to right) Marines LCpl John White, PFC Mason Vielbaum and Cpl Jonathan Morales along with Navy QM1 Brandy Day load up their potatoes at the 20th Century FOX event to celebrate THE MARTIAN at NAS Fort Worth JRB on Monday, September 28, 2015

Email ThisBlogThis!Share to TwitterShare to FacebookShare to Pinterest
Labels: NAS Fort Worth JRB, The Martian review