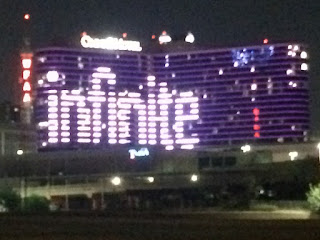 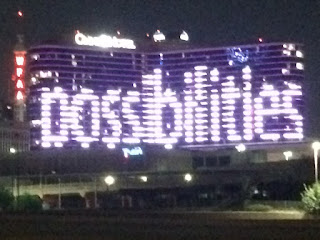 Each piece has been specifically designed for display on the large exterior LEDs on the Omni Hotel Dallas. Expanded Cinema, first presented in 2012, was named the number one art event in Dallas by several local news publications and attracted media attention worldwide. This year, Expanded Cinema will close VideoFest in the week after the festival on Sunday, Oct 25 at 8 pm. This unique public art project has already added cultural prestige to the City of Dallas.

Justine Ludwig – Curator of Expanded Cinema 2015:
“For this iteration of Expanded Cinema, I worked to pull together artists from Dallas and across the country to create a compelling and diverse selection of videos.

“The artists approached the surface of the Omni as a skin and have drawn upon the dissociative nature of having a display where many individuals are experiencing it without being aware of the nature of the work.

“Each artist has taken a unique approach to the surface of the building—rising to the challenge of this atypical mode of display.”

Connect with VideoFest: (#DVF28 and #DVF28ExpandedCinema4):


About Dallas VideoFest 28:
VideoFest (VideoFest.org) is now the oldest and largest video festival in the United States and continues to garner critical and popular acclaim. VideoFest prides itself on bringing films to the theater that are rarely available to be seen anywhere else. Films like Experimental/Art Films, Animation, Narrative and Documentary Shorts as well as Documentary and Narrative Features and some hard-to-find Classic TV episodes and Classic Films are often in the mix.

ABOUT VIDEO ASSOCIATION OF DALLAS
The mission of the Video Association is to promote an understanding of video as a creative medium and cultural force in our society, and to support and advance the work of Texas artists working in video and the electronic arts. The Video Association of Dallas (VAD) is a 501(c)(3) organization incorporated on April 25, 1989. It began in 1986 as a weekend event, “Video As A Creative Medium”, presented at the Dallas Museum of Art by independent curators Barton Weiss and John Held. That first event, which included two nights of video by selected local and national video artists, was a great popular success, which led to the founding of the Dallas Video Festival (DVF) in 1987. Video Association of Dallas also presents the 24 Hour Video Race, the Texas Show Tour, North Texas College Film Festival, Texas Filmmakers Production Fund workshops, Three Star Cinema, and other programs throughout the year.