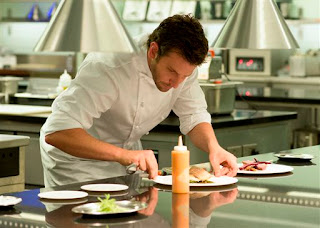 Plot:
Adam Jones is a Chef who destroyed his career with drugs and diva behavior. He cleans up and returns to London, determined to redeem himself by spearheading a top restaurant that can gain three Michelin stars.

Opening:
I took my roommate with me to see this movie and he is a chef who works at Lucia, a five-star restaurant in Dallas, so if there was someone who knows the culinary industry it would be him. He has all the burns on his arms to prove it and the worst injury I got at a restaurant was someone threw a salt shaker at me in a Denny’s…my feelings were burnt. See what I did there? That was awful, but not this movie. Let’s get reel and break this down.

Pros:
All-in-all, this is a redemption story and the story starts with the uphill battle of Bradley Cooper’s character, and in the end, you root for him to succeed. The story has some emotional punch to it to where you can get invested in this character. The writing is not anything to be wowed at, but Cooper has some great monologues sprinkled throughout about the current state of the culinary industry and food service in general; it added another layer to his character. However…

Cons:
...I felt like this could have been an even better movie if it added some more backstory in the front of this film, that way the climax would have had a more emotional connection between the audience and Cooper. There was a lot of backstory explained, but I would have rather have seen it to fully appreciate the redemption arc of the character; I just felt disconnected in some parts. Once again, it could just be me being greedy and wanting more story since I was fascinated with this character, but I still thought it was a solid story for what we were given.

Pros:
Bradley is great as always and does have a nice supporting cast around him. My favorite is Sienna Miller, and ironically, she had more chemistry with Cooper than their turn as a married couple in American Sniper.

Pros:
All food movies are going to make the food look inviting or unappetizing and this is more of the latter. The food looked sexy, delicious, and I wanted to immediately ask my roommate to recreate those dishes. The kitchen scenes are also shot with such sleek and beauty that a chaotic kitchen during service looks amazing to actually work in.

Pros:
The kinetic energy during the kitchen scenes make the movie fly by and all the smaller character moments make you interested enough to stay in for the long haul.

Cons:
I guess if you don’t like food or restaurant movies then you might find it boring? Or you might be furious that the movie is making you hungry and you won’t be able to eat until after the movie?

Overall:
This is a sensual, enticing looking food movie with some great performances, even though I wanted more backstory in the front for more of a connection when the major plot points hit. I would still recommend it.