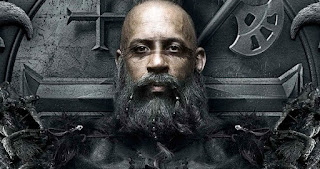 Let's say there's an alternative world where magic exists. Let's say that Vin Diesel is the biggest and baddest warrior hunting down the evil witch who lives in this huge magic tree in the middle of the mountains. His team of hunters are cut down pretty quickly by the witch queens' minions before Kaulder (Diesel) has an epic showdown with the queen (Julie Engelbrecht). He wins, but not before she curses him with immortal life. So for 800 years, and now living in NYC, he is still hunting down bad witches and turning them over to a witch council who imprisons the bad witches in an underground cavern. Witches have decided to keep the peace between magic world and normal humans. Kaulder in their police.

Director Breck Eisner (Crazies, Sahara) working the CGI heavy adventure from a screenplay by Cory Goodman, Matt Sazama and Burk Sharpless in what they probably hope will be be a series. The visuals are fun and creepy. There's lots of butterflies, nasty wasp bugs, and vine plants erupting from the ground or walls sucking their victims somewhere else. There's exclusive magic night clubs for witches where Kaulder meets cute a beautiful witch Chloe (Rose Leslie) by getting her night club burned down. He is trying to find a memory spell to help remember when he “died” at the hands of the queen. His last handler, the number 36 Dolan (Michael Caine) left him a message before he had been “killed”. His new Dolan number 37 (Elijah Wood) was sworn in the protect and assist the witch hunter. His parents were killed by witches he said, and he had met the witch hunter when he was a child. The three team up to find out who is trying to destroy humanity and why. It doesn't take long before you realize that the evil queen is literally the heart of the story.

Diesel with hair and weird beard at the beginning takes a bit to figure out it's really him. His modern day self is a bit of Fast and Furious and not a whole lot of emotional back story except he complains about living for so long and he's lonely. Caine channels the Exorcist priest with his hat and natty attire. And Elijah Wood looks like a kid pretending to be a priest. The partnership of the Chloe and Kaulder works better but for all the magic between them, they still get pretty beat up. Nothing is really explained, one has to just go with the flow. Why the queen wants to destroy humanity and change the world into the nasty and fearful place doesn't make sense. The queen makes all these pronouncements to Kaulder reminding one of the Borg Queen and Captain Picard. Hopefully in the next film, because you know they will have more, it will clear it all up. Or not.
(Review by reesa)