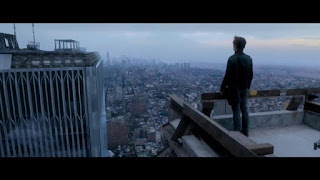 Robert Zemeckis took on The Walk, the story of Philippe Petit’s World Trade Center illegal tight rope walk in 1974, knowing he wanted Joseph Gordon-Levitt in the role of the Frenchman. Levitt actually learned to tight rope walk from Petit and became fluent in French, in order to exhibit a perfect French accent, which he executes beautifully in the film. The movie traces Petit’s rise to notoriety from his early years as a juggler, as his father attempts to kill the exhibitionist spirit within him. He runs away, becomes a street performer and ultimately seeks tutoring from the patriarch (Papa Rudy) of a tight rope circus family from Eastern Europe, played by the amazingly talented Ben Kingsley. This walk has been profiled before in other productions such as the award winning documentary Man on Wire (2008) and the PBS production, Tightrope Between the Towers.

The entire story is narrated by Gordon-Levitt as Petit, aside the flame of the Statue of Liberty on the torch walk, in an enthusiastically delivered oration that at times is a little overshadowing to the actual story line. He comes across like a little boy on Christmas morning about to open and reveal his biggest gift. Throughout the film, Petit desires, learns, trains, practices, makes his first illegal walks and imagines where he will walk next, at all times, no matter where he is. He found a girlfriend, Annie Allix, early on (Charlotte Le Bon) to encourage him and has brought her along to act as muse and cheerleader to his endeavors. The Twin Towers call to him, beginning at the age of 17, from newspapers and magazines, as a siren calls the sailor. He is caught and cannot escape the challenge and the lure, especially when he arrives in New York to scope the location out , still under construction, a month or two in advance of the August 7, 1974 event. He eschews a safety wire and elicits the aide of a motley crew of helpers, from France and America, to deal with transporting, moving and hiding all of his custom equipment.

Released in 2D and 3D, the film is visually stunning. Those who are afraid of heights should probably avoid the big screen, 3D versions. I am not completely afraid of heights but found the walk itself excruciatingly long and torturous and I even knew how the walk itself ended! It Is a must see sequence. Zemeckis allows us to sense the wind, view all the way to the ground, scan the expanse and in essence be on that wire ourselves and every part of our being screams to get off. Petit, however doesn’t mind hanging out on the wire for a while, soaking it all in and being in the zone. It is the culmination of his lifelong dream and after this, there really isn’t going to be much of anything to top it, and he knows this. And so he savors the moment, in its fullest glory. The actual “walk”, which he nicknamed “le coup” was eight passes and 45 minutes long. Just imagine it. The Walk is a story of passion, drive and the fulfillment of dreams and ultimately of purpose. While a singular event, there is so much more to who Petit (at 24 years old) is at the time, and the forces behind what made him that way. Thrill seeker, dare devil, entertainer, dreamer, man with a death wish, Petit certainly had nerve and a kind of “obstacles be damned” blind ambition to become legend. He inspires the meekest in us to just go after something…….anything. All in all, it was poignantly wonderful to see the Twin Towers again, even if through the eyes of their French lover Petit.
(Review by Cheryl Wurtz)