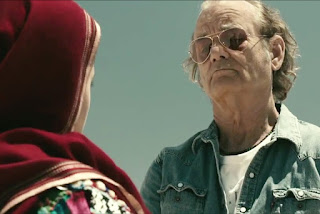 Bill Murray has cornered the market on the blundering self centered jerk in his last films, and this one is another version. That is not to say that he is not funny. As usual he owns the character of Richie Lanz, a down on his luck talent agent who scams young hopefuls into investing in him to have a career. Director Barry Levinson (Bugsy, Rain Man) working from a script by Mitch Glazer tell a story that is partially a social commentary on the American obsession with celebrity, the unwelcome presence of Americans in Afghanistan and the changing of culture in the Middle East. All wrapped up in Murray's warped but sincere vision to discovering a real star.

The film is a bit uneven at the beginning where Ritchie decides to take his client/office assistant Ronnie (Zoey Deschanel) on a USO tour in Afghanistan. Freaked out with building exploding and soldiers with guns, Ronnie takes off with the plane tickets, Ritchie's money and passport. He's stuck high and dry. He meets up with mercenary gun dealers Jake (Scott Caan) and Nick (Danny McBride) who takes him to a club in Kabul where he meets Merci (Kate Hudson), a prostitute trying to earn enough money to retire. Jake and Nick lure Ritchie with enough funds to help him out in exchange for taking some ammunition to a small town. He's driven there by mercenary Bombay Brian (Bruce Willis) who voice records his adventures because he wants to write a book. Along with taxi driver Riza (Arian Moayed) who is along as an interpreter. It's there in the Pashtun village that he hears Salima (Leem Lubany) singing in a cave with dreams of being on Afghan Star an American Idol talent show. Since it is considered shameful for women to sing (much less show their faces in public), it's going to be a hard sell to make it happen. It doesn't help that Salima only sings Cat Stevens songs in English.

While the movie seems to target the misogyny of the Pashtun, at the same time it overlooks the sexism in the portrayal of Merci (with an “i”). The movie also seems to focus on the white cast while the Pashtun are painted with broad strokes like backward patriarchal heathens. More attention should have been paid to Salima's father, the chief of the village who is trying hard to cope with acceptance of his daughter's talent, and the opinions of his community. Meanwhile Ritchie bulldozes his way through getting her on the show and eventually stopping a war.

Ritchie is filled with stories of his supposed successes in discovering talent like Madonna or getting head butted by Stevie Nicks. He plays his deal making schemes with fast talking and for some reason everyone gravitates and accepts his line of bull. The characters may come in go in this film, but Murray keeps the action happening and tethered to Ritchie. It was nice to discover that the story was based on the 2009 documentary Afghan Star about Setara Hussainzada who gets a dedication at the end of the movie from singing and dancing on the show. Something that is not allowed for women. Times are a-changing.
(Review by reesa)

Email ThisBlogThis!Share to TwitterShare to FacebookShare to Pinterest
Labels: Rock the Kasbah review