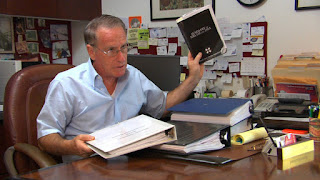 This film was a terrifying look at the Homeowners Associations of America. Among the horror shows was a captain in the military nearly losing his house, a head board member falsely imprisoning residents, and a property management group not keeping neighborhoods intact while collecting fees. I met the director of this punch in the face documentary and his passion of the subject definitely lined up with the film’s effort. The head board member previously mentioned at one point shoves keys in a resident’s face while telling him to get off of the street which is public property. We are shown how villainous people can get with just a little bit of power as this man yells for most of the videos he’s in. This HOA, which was in Nevada, also threw out a petition that called for this member’s removal. That was a key point I believe this film was trying to make in that the residents HOAs are supposed to be for are not heard. They are at times to the audience’s dismay, damaged by the actions of these associations. As expert researchers on this issue stated, you can basically sign away your freedom when one’s a member of the entities. This concept is so crucial to understand and I was completely thankful for this project to unveil these atrocities. In the case of the captain, his wife was depressed and did not open the mail stating that they had not paid recent HOA payments. The result after the HOA did not call her even though her number was on their record was that they foreclosed on her home. This family had already paid in full around $300,000 for the house which then was about to be sold for significantly less than that. It’s little sneaky bites like these that make us realize that anyone can be prey. The Associa company, who was in charge of keeping the neighborhoods it “caters” to intact, is revealed to have cracked streets, dust on mailboxes, and cracked pots in their clients’ areas. The CEO is a former state senator named, John Carona, who seemed to have a conflict of interest in making laws regarding HOAs. The ways politicians can be corrupted are re-introduced in this fantastic and informative film. There are so many occurrences that are morally wrong in this country and unfortunately this is yet another evil. Rodney Gray, the director, was very involved when I talked to him about this piece. His intelligence and education came forward to fight for help for the afflicted.
(Review by Wyatt Head)