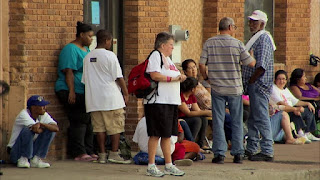 This was a film that I really hope everyone in the US watches. I don’t mean that in the way people say that about most films. This is actually a crucial film for people to understand a huge failing in the US and to have empathy for others. The camera follows The Stew Pot which is a service rendering facility for the homeless of Dallas. Through the way many people are either interviewed or filmed, the audience gradually becomes more educated. A grounding revelation from a mid-aged woman told us that she had a bachelor’s degree in engineering but lost her job. She said that her view of the homeless was completely different before her crisis and that she even used to work at a homeless shelter. In those few sentences, the audience sees how quickly the tables can turn. First Presbyterian Church of Dallas is the creator of The Stew Pot and the film highlights that they serve 3 meals every day at The Bridge. Some documented film was so brilliantly exposed like of the woman who had gotten AIDS from sexual assault. The Stew Pot gave this woman a priceless gift of painting while others gain great benefit from art as well. The documentary brought to light the valid reasons for homelessness that I think people over-look unfortunately. Economic displacement, domestic violence, and mental illness were some of the hurting reasons why the homelessness problem has escalated. Some of the video was really realized like when they film a guy who is trying to be a performer out of a survival instinct. Some of the actions from The Stew Pot were just like hands from God touching us such as providing a newspaper job to a woman who ends up renting an apartment. Other actions were just as equally remarkable like the gun buy-back that the church initiated to prevent danger by destroying the guns. Meanwhile, one realizes how bad America is in disarray while gun owners right across the street offer more money than the church to keep the guns. These stories of resources meeting those who are in need were so uplifting to watch. There needs to be so many more mandated programs from the government for this situation. To film the charities reaching out to the most vulnerable in our society was a much needed objective for Dallas. As it is beautifully stated, “Homelessness is like being out in the ocean with no motor on your boat. The Eagle is free but that does not guarantee it will get fed”.
(Review by Wyatt Head)