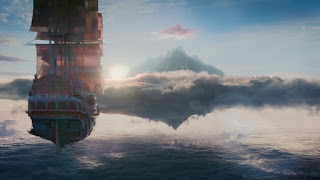 The beloved story of Peter Pan by J.M. Barrie was first staged in 1904 and later received some notoriety by the casting of women to play Peter in later productions. In director Joe Wright's version written by Jason Fuchs, the prequel explores how Peter came to Neverland and even had a friendship with Captain Hook. Whether we will see how these two have a falling out probably depends on how this movie does at the box office. Wright best known for period pieces like Atonement, Pride and Prejudice and Hanna is great with visuals. Pan explodes with interesting visuals, eye candy, and wondrous costumes. It's unfortunate that the story doesn't quite live up to it all.

Peter (Levi Miller) is left at the door step of an orphanage with only a note from his mother and a necklace shaped liked a pan flute. He holds the belief that his mother will come back for him. The nuns who run the orphanage are fairly despicable and Peter is convinced that they are hoarding food (they are) and are responsible for some boys disappearing nightly (they are). When he discovers what's happening, he's suddenly captured by pirates and flown away to Neverland. There they are put to work in the mines harvesting Pixum dust for the evil Blackbeard (Hugh Jackman). The fairy dust keeps him eternally young. He has ruined the landscape of Neverland, and is after the mother lode in the fairy kingdom which is protected by the Neverland natives in the forest. The arrival of Peter makes Blackbeard paranoid as the local legend prophesies that a young man with the sign of the Pan and that can fly will be his death.

Peter manages to escape the mines with the help of Hook (Garret Hedlund channelling Hans Solo) and Mr. Smee (Adeel Akhtar). They are captured by Tiger Lily (Rooney Mara) and brought to the native village. When they discover that Peter may be the Chosen One, they protect him when Blackbeard catches up, destroying their village, trying to force them into giving up the map to the fairy kingdom. Peter just wants to find his mother and when he eventually discovers the truth, he has to man up pretty quickly to save Neverland.

The controversy about the casting of a white person as a native character still has not made a dent in the diversity in the casting of this movie nor others. It's an annoying issue with the movie, despite the job done by Rooney or Wright's excuse that Neverland's native inhabitants represent all aboriginal populations. Hint for Wright, in future movies, please note they are not all white. The strangeness of the Neverland mines full of former lost boys who are now men with no women around is a bit disconcerting. Jackman eats up the screen with the over the top bad guy, Mr. Smee is just as weaselly, and Levi Miller does well as the intrepid young man who apparently will never grow up. Hopefully the next instalment will take their time in creating a perhaps darker story as to why Hook gets a hook.
(Review by reesa)