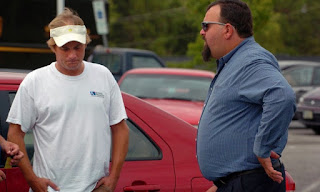 This story follows the connection made between John Wood and Shannon Whisnant after Shannon finds John’s severed foot inside of a grill he just obtained. The history of the pasts of both men is told in a very human way through this foot. Shannon tries to garner fame for this international story while John wants it back and de-fleshed as a tribute to his rested father. John had previously been in a plane accident leaving his father dead and him an amputee. Some really tickling lines that came from the Southern stereotype of this documentary were “I found that plum nasty foot!” and “One day I’ve had mo money. . . that would be super cool.” Shannon is quite the hoot and the funniest man I’ve seen in a documentary ever. Yet, this story gets serious when we realize that John had an uncontrolled addiction to alcohol and drugs that broke him from his family. This addiction maybe comes from a trying to be pleasing to his wealthy father we find out. The telling from the man himself about when he slept under a bridge was a sharp note of hopelessness. When John’s sister, who did everything she could, says she was waiting for the call that John was dead, you feel a sense of disaster for him. I would take this tale to be a story of how unexpected consequences lead to better gifts sometimes. There was one shot that I absolutely respected in this film which had a photo of Shannon with glasses that reflect John speaking in 2004. Knowing it was more than a decade ago kind of gave that photo a time warp effect. John’s family explains to the camera that his mother was treated like an employee and a subordinate by his father who was a successful businessman. The family had a massive property with a roller rink and tennis court which shows that riches cannot buy everything. This knowing of the Wood’s wealth to Shannon led him to make a horrid comment stating “That boy had a silver crack pipe in his mouth” during a harmful time in John’s life. The idea of drug addiction as a disease is permeated for me throughout the 84 minutes of this special filmmaking. Shannon’s heated past too comes to light with the revelation of his father beating him faster than he could breath. A person we see as maybe the mischievous one of the film is given a realization of his troubles. This is a film of an event that did unexpected things for both men. As John states in the last parts of it, “Him doing what he did. . . I got my life back.”
(Review by Wyatt Head)