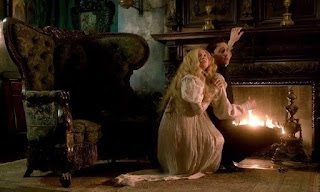 The director of Pan Labyrinth, Hellboy and Pacific Rim, Guillermo del Toro wrote with Matthew Robbins an atmospheric Victorian romantic ghost story with an attractive cast. Costumes and set decoration prevail with stark colors and things that creep in the night. The mystery is sort of figured out shortly at the start, but the journey to it's ultimate conclusion is a visual treat for the eyes. The ghosts not so much. There isn't any creepy jump in your seat moments and some are quite perhaps unintentionally funny. Still it's a worthy addition to the del Toro universe just not as memorable.

Edith Cushing (Mia Wasikowska) isn't your typical Victorian era young woman whose only concern in life if finding a husband. She is an aspiring writer of ghost stories. When she was a child her mother passed due to cholera. She was visited by the ghost of her mother who told her to “beware of Crimson Peak”. Her father (Jim Beaver) is a rich construction magnet in Buffalo, NY. She wants to use her father's office resources to type out her manuscript as editors have declined her work telling her that she should write romance. Typing her story would keep her sexual identity out of the equation. The city's matrons are excited as a Baronet is coming to town and they have their daughters lined up to meet him. Thomas Sharpe (Tom Hiddleston) meets with Mr. Cushing in hopes of getting funding for a mining machine he wants to build. He cute meets Edith who is immediately repulsed by his title, but softens when he compliments her on her writing. It probably helps that he's drop dead gorgeous. Tom begins to pursue the young woman, but her father has an initial dislike of the young man. He asks to have him investigated.

What Mr. Cushing finds exacerbates the rest of the story and Edith's eventual move to the Baronet crumbling manor home in northern England. The house is full of holes, creaking pipes, blood red water to match the land around them, and the unsettling sister Lucille Sharpe (Jessica Chastain) who is always pushing tea on the innocently in love Edith. The siblings telegraph some weird vibes between the two which for some reason Edith doesn't catch on. Maybe she is distracted by the house which has it's share of ghosts and secrets that it seems to want Edith to discover. Being the writer, her curiosity keeps her from being too shaken for her own good. It's a good thing Edith's former suitor Dr. Alan (Charlie Hunnam) thinks something was amiss and shows up later.

The film as beautiful and sumptuous appearing, lacks any spooky underlings like del Toro's Spanish language chillers like The Devil's Backbone and Cronos. Both Hiddleston and Wasikowska shine with full force gothic romance, while Chastain is perfectly strange with fluctuating mood swings. For a end of October movie it's worth a Saturday afternoon, it's not what one comes to expect from del Toro.
(Review by reesa)