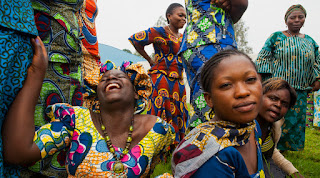 This equally intriguing and explicit documentary explores the Democratic Republic of Congo and a haven for sexually violated women called the City of Joy. We, as an audience, are enlightened by hearing of the morally depleted actions of multi-national corporations in taking over of mines in the area. We come to learn how different militias are being paid by these corporations to protect the mines and how these militias are sickeningly violating women. (Warning: Getting Explicit) These violations consist of burning, mutilation, and the killing of unborn fetuses. These women have been raped by ten or more men repetitively in one day. This was a truly disgusting story that was emotionally excruciating to hear.

The beauty of this film though is how it curved through the City of Joy and discovered the love that these women receive when in the facility. The film perfectly captured the joy and the smiles that these women shared when going through multiple classes. It really captured the rehabilitation of these women from a place that was extremely dark and sadistic. The patients at the City of Joy were saved from the wild danger that occurred just outside them.

A really illustrative opening revealed that a lot of the patients were extremely happy growing up before the war of the mines. A woman narrates as she says that there was nothing to worry about because they had peace. They would go pick sweet potatoes for their families in the villages that they resided in. This war of the mines is so infuriating because of the fact that these catalyst corporations are partially from the United States.

The three main sources of direction and light in the patient center are Christine Schuler-Deschryver, Dr. Denis Mukwege Mukengere, and Eve Ensler. Ms. Ensler is famous for writing The Vagina Monologues, a play that became famous for its subject. The different interviews done with Christine and Dr. Mukwege are breathtaking in their detail about what the women have gone through. Both of their passions for ending this catastrophe are clearly present as they are two blessings to the DNC.

This is a film that educates one faraway about what issues that faraway place is causing other areas. This factor of education is one of the irreplaceable gifts of documentary cinema. Film can explain issues, cause us to act on those issues, and make massive change a reality. City of Joy is a call to action.
(Review by Wyatt Head)

Posted by Dallas Movie Screenings at 8:34 AM