How to be a Latin Lover 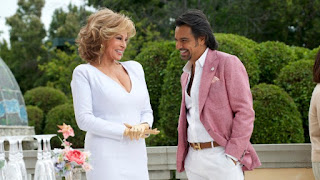 "How to be a Latin Lover" is the first English comedy staring the hilarious Mexican star Eugenio Derbez as Maximo a aging gigolo that has lost his sugar mama of 25 years to a younger man. With not a pot to piss in and no where to go Maximo tracks down his estranged sister Sara to crash on her couch played by the incredible Salma Hayek, that is now a widow with her 10 yr old son Hugo played by the adorable Raphael Alejandro. While looking for a new meal ticket I mean wife hilarity ensues, but he learns a valuable lesson that family and people that are there are more important than material wealth and creature comforts. As his father said "You get what you work for, not what you wish for".

Eugenio is know for his brand of vaudevillian comedic style in Mexico but not as known in the states but should be. He is the king of cameos but when he leads get ready to laugh your ass off, English or Spanish this guy kills it at comedy. Salma Hayek plays the straight man in this flim to his slapstick humor as the responsible sister that won't deal with his nonsense. They did a great job of blending a Spanish and English in this Bilingual hit, what is cool this was the first film in theaters to be dubbed in Spanish from it's original language so you can see it completely en español at select theaters. I like that they are making more language diversity in film because the world doesn't speak one language (neither does America), so why should our films be one language. The mix of Spanish and English music was great too. How they filmed a fast and tight which kept me absorbed in the film and with lots of slapstick comedy you can't tear your eyes away for a second or you'll miss something funny. I love comedies that have a moral to the story, instead of just ending (but a happy ending).

This was a great comedy I loved every minute. It had everything you want, even a blooper reel at the end. With the great line up of comedic actors in this film packs a punch (no spoilers), so you will laugh til you hurt and learn how to do a sexy walk. With all that said this film is definitely worth the ticket.
(Review by Samantha Leggio)

Email ThisBlogThis!Share to TwitterShare to FacebookShare to Pinterest
Labels: How to be a Latin Lover review, Samantha Leggio