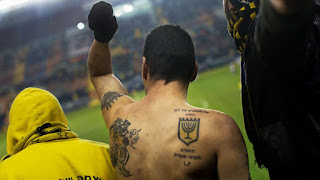 Forever Pure
Director:
Maya Zinshtein
This revealing documentary of one season 2012-2013 on the soccer/football club Beitar Jerusalem and how racism is alive a well in the world of sports. The rabid fans of Beitar Jerusalem F.C. were not forgiving when the owner at the time Arcadi Gaydamak added two Chechen Muslim players to the team, Zaur Sadayev and Dzhabrail Kadiyev. The controversial nationalist group "La Familia" are blatantly racist to the new players even though shockingly the team has had Muslim and non-Israeli players in the past. With very organized chants of hatred to especially Arabs they scream this putrid ideology from the stands like a militarized cheer squad. A division happened to the team and the fans with a "if your not with us, your aginst us" mentality began coming from "La Familia". With verbal attacks of chanting extremely horrific things, former chairman and player Itzik Korenfine relays a story of how a few feet from him was shouted "we will rape your daughter" and how he had to check his vehicle for bombs everyday just because he lost favor with the fans. The extreme violent behavior for just a game of sport shows how far the world has to go to stamp out prejudice.

The film was honest look into the lives of these players and for the fans it's more than just a game. It was shot beautifully, it was raw and gritty showing with how easily they can be loved one day and hated the next just for accepting people. The racist tirades coming from all sides is claustrophobic because of how many people are involved. The level of mass hysterical hatred is mind blowing, with Molotov cocktails used to burn down their own teams small museum over this fiasco.

The shocking thing I noticed is that the owner at the time brought in the new players knowing how fiercely racist the fans were. With signs stating "Our forefathers said never give up on principles, Beitar forever pure without Arabs" in 2008 years before the players were added. If their intent was show the real face of these certain fans then they were successful, give them enough rope and they'll hang themselves as I say. Definitely worth watching this fandom is a site that needs to be seen (if nobody talks about it nothing changes). I'm not exactly a sports fan but I did play soccer in school so this was too interesting to pass up absolutely worth the ticket.
(Review by Samantha Leggio)