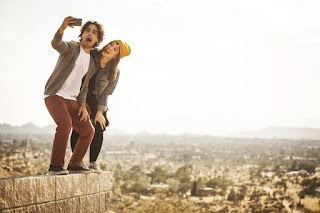 THE RELATIONTRIP
* (out of ****)
(The Relationtrip plays at the Dallas International Film Festival on April 1st and 2nd.)
The Relationtrip is an insufferable romantic comedy about insufferable people who deserve each other that moves inexorably toward frustration atop contrivance atop cliché. The title is a pun created by both participants of the initially platonic, eventually romantic pairing at the center of writers/directors C.A. Gabriel and Renée Felice Smith’s film, and the quality of that pun should inform the viewer’s expectation of exactly the kind of thing into which he or she is getting him- or herself. It hits all the expected notes of the romantic comedy subgenre, and then it deviates. In that deviation is where its blackened, cynical heart lay.

One-half of the couple is Liam (Matt Bush), who is also one-half of a musical group whose name is unsuitable for print, and when his other half, Buddy (Nelson Franklin), stands him up at a performance, he is forced to perform, alone, a song about peanut-butter-and-jelly sandwiches. None of that belongs to a sentence that this critic was prepared to write, nor were you, reader, likely to expect to read it. Quickly becoming accustomed to that feeling for the rest of the review is important, though, especially upon recounting what events transpire after his Meet Cute with Beck (Smith), an eccentric audience member, who appreciates Liam’s efforts onstage.

Liam and Beck strike up an immediate friendship based on their shared attitudes toward life, love, food, and societal norms. They agree to go on a trip, illegally intruding upon someone’s house along the way in a remarkably uncomfortable sequence that does too good a job of establishing their quirks and wacky behavior. Bush and Smith share an easygoing chemistry in some of these scenes, and there is even one that allows the characters to bond over their shared histories. Then again, there’s also Chippy (voice of Eric Christian Olsen), the Muppet-like figure whose possessiveness of Beck competes only with Liam’s possessiveness of the women he dates.

In other words, the more honesty is afforded these characters by Gabriel and Smith, the less honest they are to the audience. It’s a strangely circular process of the screenwriters trying to avoid the nature of their characters and being forced to confront the fact that the least appealing aspects of their characters are the most important to relay to us. It is consistently frustrating to witness the film constantly making excuses for Liam, who stalks the women he “loves” in an unapologetically predatorial way, and objectifying Beck, who winds up being almost exclusively defined by her relationship to Chippy, the physical id of the chasm in the relationship between the humans. Perhaps there is a truthful, weirdly wonderful movie to be made from these various pieces, but The Relationtrip is not it.
(Review by Joel Copling)