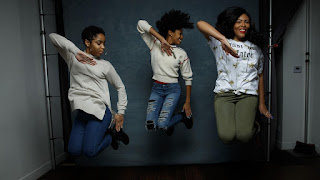 This exceptional documentary explores the lives of several young girls in a public charter school who comprise a step dance team. The school’s goal is to get these girls all into college and for them to graduate. The setting is Baltimore and all of these students come from low-income families. I was in awe of the energy, focus, and performance that these girls had in their expression of the dances.

The film fully examined these students’ lives and what they went through on a daily basis. Their neighborhoods were dangerous, they could have no food in the fridge, they could have no lights, and they could even have no fridge at home. The step group was the essential component of these girls’ lives that provided a haven outside of the obstacles that they faced.

We are primarily introduced to Blessin, a beautiful senior who has gifts as well as burdens, in the documentary. She is a happy-go-lucky energy ball who has strength that is contagious. She also has a difficult life at home, although her mother tries her best to keep the family sane. She has multiple family members living under one roof and her mother has dealt with considerable depression for decades. Her mother has had a hard time being there for Blessin in relation to the school and in one scene we see this illustrated. Blessin also has had a dismal track record when it comes to academics. We see her during the film try to completely re-arrange her performance with school and then also relapse. The movie did a phenomenal job in getting the audience to understand Blessin and root for her up until the last segment.

The true gem of step dancing is greatly exploited in this film to its benefit. We see multiple groups from different high schools profoundly impact the audience with their serious talents. We see whole theaters getting rallied up because of the supremely executed performances of the step teams.

The film definitely intertwined well the aspects of low-income life with what these girls were doing. Blessin, in a heart-breaking scene, explains how she doesn’t mind not eating but cannot stand to see her 6 year old relative not eat as well. He is simultaneously playing in the hallway after stating that when they receive their food stamps he will eat a humongous amount. Scenes like these from the actual lives of people are, in my opinion, what cinema is about period. To actually see someone be hungry and for them to communicate their situation is connecting to us as human-beings. All persons have much to gain from this project.
(Review by Wyatt Head)

Posted by Dallas Movie Screenings at 10:29 AM