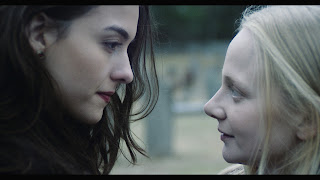 At only 76 minutes long this tense horror/thriller sends you down a mind bending rabbit hole. Adele is a shy and kind young lady that would do anything for her family even though she feels like a outcast. Her pregnant mother has her take care of agoraphobic aunt for money for the new arrival. Aunt Dora stays in a small town in a large Victorian house that does not skimp on the eerie and foreboding feel. Things start out normal serving her aunt's every need, but while Adele goes for a slice at a pizza joint she meets Beth and everything changes. Beth is the complete opposite of Adele in almost every way, but that's what attracts Adele to her. As the relationship becomes more and more intimate Adele starts to take the bad advice from her temptress which leads to her down spiral into insanity.

Erin Wilhelmi embodies as Adele in so many ways to even make you feel awkward as hell by just watching her. Quinn Shephard was totally Beth,(whatever Beth was) she played her to a tee like a siren calling Sailors to their death. Their twisted love affair was very relatable, like a parasite and host Adele fed off of Beth's energy.

Susan Kellermann played Aunt Dora the shut in, she has been on television, Broadway, and film known from movies like my two favorites "Beetlejuice" and "Elvira: Mistress of the Dark". She really stood out to me the most, and seriously creeped me out. I thi The cinematography was beautifully taut and very on point, saying that I wished they turned up the intensity of this film though. I felt like I wanted to see more and like something was missing, but I don't know what. It felt drawn out for suspense but not much pay off as short as it was. It was very strange and different as movies go, but it was well done and kept me guessing.

I would like to see it again. It might be one of those movies you find something new every time you watch. Lots of nuances that you have to really watch this one, you can't be distracted by anything or you'll miss something (I'm telling you from experience). In the end, you have to see this weird little film if your into the macabre cinema like I am it's totally worth the ticket.
(Review by Samantha Leggio)