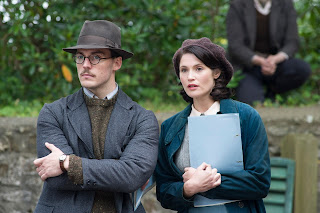 Just like the title, this film is pretty dang fine. Bill Nighy is also wonderful and should be nominated for Supporting Actor.

Title: Their Finest
Rating: R for Some Language and a Scene of Sexuality
Run Time: 1hr & 57min

A portrait of the English film industry of the early 1940s is painted in Their Finest, a surprisingly enjoyable period piece that also offers a unique view of wartime heroism. The film isn’t based upon a specific event in history but seemingly upon any such production that took place in this era of British filmmaking designed to fight against Adolf Hitler. The primary characters are the trio of writers hired to fit the film in production into a specific mold. The primary setting is London, which is under attack from German bombers. Explosions rock the streets day and night. Anyone, at any time, could die, and that pall of death grounds what is otherwise an acrid and perceptive comedy about egos clashing.

Catrin Cole (Gemma Arterton) is one of those writers, taking pride in being a constant thorn in the side of film executives who only want female writers for the “slop” (the sentimental stuff – perfect, the men reason, for the “gentler sex” to handle). The other woman in the group is Phyl Moore (Rachael Stirling), and the man – and de facto leader, obviously – is Tom Buckley (Sam Claflin). The film’s most pointedly funny material, or some of it anyway, surrounds the dynamic of this group, with Tom transferring much of the action from the female characters to the male ones in the screenplay, Catrin protesting, and Phyl just trying to keep the peace while resigned to the fact that she cannot be of much help in this fight.

The other part of the comedy comes with the inception of the film’s production. It is to be a dramatization of the Dunkirk evacuation between May and June of 1940. Rather than a straight dramatization of it, though, the studio execs (led by Richard E. Grant’s Swain and Henry Goodman’s Baker) want it to have mass appeal. They’ve located a true story, about a pair of twin women whose act of heroism is exactly the kind of combat-suspense picture the studio wants. One thing, though: They must shift the act of heroism to being that of a man, known as “Johnnie” in the film (played in the film-within-the-film by Wyndham Best, in turn played by Hubert Barton). They must also reconfigure an abusive drunk of a father into a comically drunk uncle for purposes of optimism, and they approach popular genre actor Ambrose Hilliard (Bill Nighy), who agrees reluctantly to take on the role.

A lot of this main driving plot is so light, funny, and surprisingly insightful about the filmmaking process, which consists of a lot of grief for the crew and the cast alike, that it’s a wonder the shifts into dramatic territory aren’t more jarring. Deaths and the bombings of property hit like gut-punches. A subplot involving Catrin’s tumultuous relationship with Ellis Cole (Jack Huston), a man with whom she is living although they are not yet married, is a bit of a distraction that leads to a melodramatic revelation. It matters less than it could have in a film with less able direction than what is provided by Lone Scherfig or a screenplay (by Gaby Chiappe and based on a novel by Lissa Evans) that had a broader sense of characters who are capable of real compassion, with which the movie is generous.

The actors are the main component of allowing this material to work, from Arterton’s forthrightly honest Catrin to Claflin’s superbly indifferent, eventually warm Tom to a very Jake Lacy as the lunkheaded American actor shoved in for star appeal to Nighy, who is riotous and charming in a superb performance worthy of any accolade one can give it. The coup of casting so many actors on top of their game gives Their Finest a credence and an urgency it might not otherwise have. This is a good film, warmhearted and engaging.
(Review by Joel Copling)

Posted by Dallas Movie Screenings at 9:35 AM