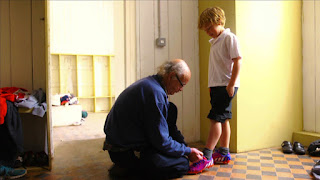 This unique film journeys through the lives of John and Amanda, two elderly teachers at a boarding school in Ireland, as they conduct their love of teaching to the many younger students at the school. This film brought so many gifts where one of which was the peak into this vastly different reality in this school. The school was a scene to behold in itself as it resembled an aristocratic home with multiple paintings inside and stunningly beautiful greenery outside. This was, after all, located in the country.

The best gift of the peak inside allowed us to understand what these children were experiencing and also how they interacted with the others. The unfamiliar concept of being, as a child, sent to a living situation that is also one’s school was utilized in an incredible way with this piece. Some children were immediately homesick as one would imagine being that age in those circumstances. The comforting aspect was that in those early scenes there were middle-aged women staff members caring for the children. The utmost love and compassion that each staff member transferred to the students was remarkable.

The expertise that John and Amanda both possessed was immeasurable to say the least. They both had gone through decades of being the benevolent authorities within that school. The film brilliantly captured all of the facets working in a usual boarding school. Some of those were the playing outside with forts, the sneaking out of bed in the dormitories, and the extra-curricular activities that these children enjoyed so much.

There was a mind-blowing scene where the children were asked about their opinions on same-sex marriage. I instantly was surprised of the topic but simultaneously also understanding of the fact that in Europe especially students carry maturity in a sophisticated environment. It is funny to think of something like that occurring in a conservative southern state in the U.S. In my opinion, the choice to document that class in particular was stupendous.

The film also brought a certain amount of emotion that was communicated effectively. For instance, there is a girl who is completely quiet for most of the film who I wondered if she personally was bullied. The turning point for her is because of her academic diligence and performance she wins numerous awards where she subsequently becomes talkative. Altogether, In Loco Parentis is a superior cinematic experience that espouses culture and insight for all in the theater.
(Review by Wyatt Head)