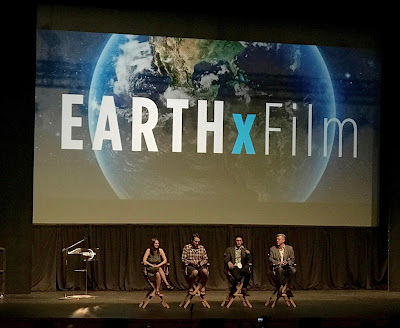 
The inaugural EARTHxFilm Festival began tonight with a screening of CHASING CORAL at Dallas Fair Park Music Hall! It is an amazing film about the coral reefs in our oceans. Did you know that the Earth's temperature would be over 122* F without the oceans absorbing 93% of the heat? Maybe you should see this movie! Good news! There will be a second screening this weekend! Come out to Fair Park this weekend to experience the largest Earth Day celebration! #EARTHxFilm #EarthDayTexas #DallasFairPark #ChasingCoral

Here is a link to the full film schedule:

Here is a little synopsis from the filmmakers: Clean water is supposed to be every American’s birthright, but when the City of Flint fails to properly treat their water system, and city and state officials move to cover it up, residents fight to fix their vital lifeline and thwart the effects that a politically negligent system created. Bigger Than Water explores the Flint Water Crisis through the eyes of those directly impacted, and illustrates how a thirst for money poisoned an entire city. This film depicts one community’s fight for justice as they ban together to ensure their survival.

Here is some information about the Director: Rameen began his career in filmmaking at the age of 19. As a young man on the streets of Baltimore, a rare opportunity to learn editing provided the foundation for a creative and sustaining career. With over 17 years of experience directing, editing and producing film, television, and live concerts across the nation, Rameen has brought his unique perspective and storytelling abilities to every project he takes on. From series work on Discovery ID, A&E Network, The History Channel, National Geographic, MTV, TLC, and ABC, to independent music projects and social justice documentaries across the globe, he is both artist and activist – using his artistic talents and resources to fight for justice on many fronts. He has worked with artists including Snoop Dogg, Eminem, Dr. Dre, The Outlaws, Nas, The Black Knights, Creed, Mandy Moore, Brittany Spears, Henry Rollins, Cypress Hill, Ice Cube, Eight Ball & MJG, 36 Mafia, as well as countless underground hip hop and rock groups nationwide.