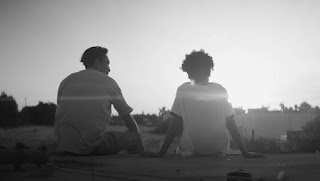 It's 1992 and the Rodney King beating has made racial tensions run high in South Central, but the neighborhood of Paramount, it's business as usual with the normal racial violence among it's denizens. Justin Chon who directed, wrote and stars in this feature film which won the NEXT audience award at Sundance this year. Shot in black and while that enhances the period and stark life of the LA streets where getting beat up is typical occurrence.

Chon plays Eli who with his brother Daniel (David So) are first generation Korean-Americans, run a shoe store that was started by their late father. The place looks run down and funky, but still manages to attract a mostly black clientele. Eli buys his stock from the back of a truck, Daniel wants to be a soul singer, and little Kamilla (Simone Baker) who skips school to work with the brothers at the store. The dynamic of the three is like a boisterous feuding family. Kamilla lives with her sister and brother Keith (Curtiss Cook Jr.) a thug that beats up Eli and Daniel occasionally as he harbors a grunge against the brothers. Across the street is a liquor store run by Mr. Kim (played by Chon's father, who remarkably had a store that was looted during the LA riots) who was a close friend of their father, but has a contentious relationship with the brothers.

The term "gook" was a derogatory word to describe Asians during the Vietnam and Korean wars. The highly diverse population in the Los Angeles area keeps the hostility local. The Hispanic gang tags Eli's car with graffiti with Gook prominently painted on the hood. The African-American gangs want to join in the looting following the police getting cleared of responsibility of the beating thus starting the riots that besieged the city. While the inbred violence of the times and space exist, the film manages to get things light enough to explore the sense of family between the brothers and Kamilla, and why Kamilla feels more comfortable with the guys, then with her own siblings. The reason for the friction between her family and the brothers is explored and the movie caps off with a tragedy that seems inevitable.

The social issues of the times does not mire down the movie, but enhances the struggle of trying to eke out an existence. Eli really wants to keep his father's store going despite the lack of business and the blase attitude of his brother who has his own dreams of being a singer. Life is hard, but Eli and Kamilla have fun at the car wash, eating hamburgers, burning rubber in the parking lot. They sit on the roof of the store and contemplate the world. The film is fascinating and uneven, but worthy of it's audience award. It's about time the Asian-American experience has been explored.
(Review by reesa)