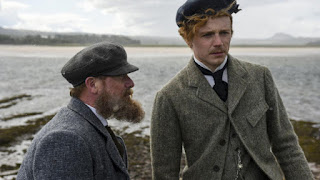 This story was truly an enjoyable one and the film had so much aesthetic beauty to it. Tommy Morris is a golf-shop worker who works with his father for the privileged men of Scotland. He practices golf with his father and excels so much that he beats him on the course. Tommy then starts a semi-career playing for the privileged men he encounters until he changes the fundamentals of the system with his power.

This story had such an appeal in its following of a man who transcended social boundaries. Anyone, golfer or not, would appreciate seeing this piece as it explored the personal life of Tommy Morris in great detail. Tom Morris, Tommy’s Father, is considered still today to be the founding father of the modern game of golf which adds gravity to this project. This really was a fantastic underdog story in terms of the social strata within Scotland at that time. Through his excellent golf abilities, Tommy was able to set things right in a more ethical way than had been practiced in the past.

The illustration of the father and son relationship was inspirational in the way it uplifted me. Tommy was a bit stubborn and his father continuously loved his son even through the turbulence that would sometimes occur. The locations chosen for shooting were impeccable. They were vastly green with appealing structures for the town streets. The golfing grounds were accurately representing what the terrain was like in the early days of golf.

Tommy’s loss of his wife in the film is so devastating and saddening as their relationship builds during many scenes. In that specific and tragic scene, the camera looks from outside the window while Tommy is utterly crushed in his grief. The family embraces Meg, Tommy’s wife, after a challenge, and protects her in a moment of tension at their church. The words of Tom as he says to his wife that Tommy loves Meg and they have to do the same indicate the good in his heart.

The script was very good in how it transitioned from one time to the next and got to the points in the movie. Tommy’s ego was in full display and Jack Lowden, the actor playing him, brought that sense of youth to the character. He also brought that sense of care that Tommy had for Meg and his brothers. Here is yet another film that was a valuable use of my time.
(Review by Wyatt Head)

Posted by Dallas Movie Screenings at 11:33 AM