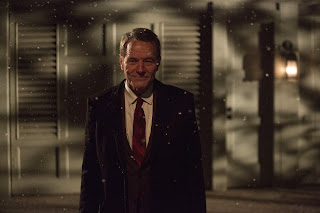 Writer E.L. Doctorow let Robin Swicord option his 2008 New Yorker short story which she adapted for the screen and directed. The film had its world premiere at the Telluride Film Festival in 2016. This is truly an unusual dark comedy that is a fascinating character study of a mid-life crisis meltdown, tuning in and dropping out. But out only as far as the garage attic in his own backyard. It's a Bryan Cranston one man show as he narrates and tries to make sense of his reasons why he's doing it all.

Howard Wakefield (Cranston) is a successful financier who gets stuck on commuter train on the way home to the suburbs when the power goes out. He walks home ignoring the calls from his wife (Jennifer Garner). They had a bit of a fight previously and was not looking forward to more attitude. So he views his family from the window of the garage attic. Watching and contemplating. When he ignores the next call, his wife takes his dinner and tosses it in the garbage. The longer he waits in the attic, he can't seem to come up with a good enough excuse why he's late. It's becomes more problematic when he falls asleep. How can he walk back in now and have a good enough reason why he spent the night in the attic?

Howard is a competitive person. Which is why he has done so well at this job. His best friend Dirk (Jason O'Mara) is similar in temperament and they constantly challenge each other. Howard takes it to a whole other level when he steals Dirk's girlfriend and marries her. After having two teen daughters, Howard finds challenges in playing a sexual jealousy game with his wife, getting angry when she flirts at parties, then having hot sex when they make up. But that last fight was too much for Diana. She was still peeved at him. Hence, he continues to watch from his upstairs window to discover how she is coping with his absence. Does she think he's having an affair? Was he in an accident? Was he kidnapped? Of course she reports him missing to the police. He wonders if her tears are real, and the comfort of Diana’s best friend, the widow Babs (Beverly D’Angelo) who hates him, doesn't make things easy in his mind. When Diana goes to work, he slips in the house to get some clothes and supplies, erasing any evidence of him being there. He fixes up his attic retreat while justifying his actions to himself. After a point he decides they seem to be doing well without him. This leads him to decide that he will not go back in the house and live on his own resources, even if it means sharing the garbage with the local raccoons.

He's entertained by his own funeral held at his house, getting angry as a handsome man seems to be hitting on Diana. He wonders about his daughters who he sees more of now that he's silently watching them. He spies on the doctor next door who cares for special needs kids. but a pair of the developmentally challenged kids (Pippa Bennett-Warner and Isaac Leyva) discover him and he worries that they will out him. Months go by and Howard is looking unwashed, unshaved, and bum like ratty. At this point he's unrecognizable. He even comes out at night to scavenge the garbage cans like the other hobos in town. Soon it's fall and winter for which is woefully unprepared. Howard knows he has to eventually untangle this mess he created, and the ending while offering alternative scenarios, lets the audience decide instead.
(Review by reesa)