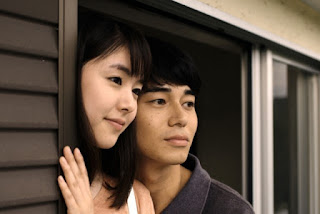 Based on a novel by Tomoka Shibasaki, the title of director Ryūsuke Hamaguchi‘s film, “Asako I & II,” gives the impression of a work that conjoins two different productions, perhaps two shorter films edited into one feature, rather than the title of a single feature film. Hamaguchi’s film follows Asako (Erika Karata), the lead character’s name used for the film’s title instead of the title of the novel, “Netemo Sametemo,” over the course of nearly a decade.

When the movie starts, Asako is wandering through a photography exhibit at an art museum. There, she meets free spirit Baku (Masahiro Higashide). Despite the concerns of her friends, Asako begins to date Baku. Their fling is short-lived. Baku has a tendency to wander away for extended periods of time without telling anyone where he’s going. One day he leaves and never returns.

Two years later, Asako is now working in Tokyo where she meets Ryohei (also played by Higashide). Taken aback by his physical similarities to her lost love, Asako timidly enters into a friendship with Ryohei, reluctant to commit due to her still strong emotional attachment to the absent Baku. Ryohei, the polar opposite of Baku, grounded and loyal, falls for Asako, forcing her to choose whether or not she wants to continue pining away for a long-lost boyfriend or focus on what’s actually in front of her.

It becomes apparent that the film’s title is introducing the idea of the double. In the case of Baku/Ryohei, the doppelganger. The idea is physically shown by Higashide’s dual performance. In the case of Asako, the duality of her desires. The idea is metaphorically shown in Asako’s naive, youthful desire for Baku and her experienced, grown-up decision to date Ryohei. The lines between her dual desires are blurred when, five years after meeting Ryohei, Baku makes a sudden reappearance in her life.

Hamaguchi’s film is finely put together, featuring an excellent performance by Higashide. He does a great job of portraying Asako’s two boyfriends. Viewers who don’t know that Higashide is playing both characters - one aloof and mysterious, the other attentive and straight-forward - may find themselves wondering if they are played by two different actors. Karata, a TV actress making her feature debut, is fine as Asako. She shows the young woman’s crush-like attachment to Baku before showing her more jaded and hesitant affection for Ryohei. The duo works off of each other well, making their multiple on-screen relationships believable.

The material is handled well by Hamaguchi, who keeps the film from delving too much into angsty melodrama during the characters' teen years or veering into soap opera-esque territory once the characters are working adults. “Asako I & II” goes on a tad too long as Asako comes to her final decision on the direction she wants her life to go. Some of her actions make it hard to believe the eventual resolution. Hamaguchi doesn’t tie things up in a clean knot, making things slightly more believable.
(Review by Bret Oswald)